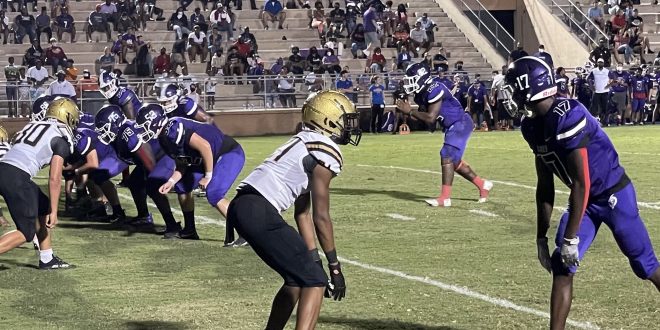 Both teams got off to a slow start on offense. Neither offense put up a first-half touchdown. The only touchdown of the first half came on the first play from scrimmage, where the Gainesville Hurricane’s running back fumbled leading to a defensive touchdown for the Bishop Moore Hornets. The Hornets took the lead 6-0 as their kicker was unable to make the extra point.

The Hornets controlled the time of possession for most of the first half. They were aided by costly defensive penalties from the Hurricanes. Neither offense could create much against their opposing team’s defense. Both defenses created turnovers but were let down by their respective offenses. This lead to a score of  6-0 in favor of Bishop Moore at the end of the first half.

The Hurricane’s offense rallied in the second half to lead to the win.

In the first half, the Hurricanes struggled to find the end zone. The second half was a different story. In Gainesville’s first offensive possession coming out of halftime they were able to get their run game going. Their threat on the ground led to an open passing touchdown to the back right corner of the end zone late in the third quarter. This score would give them a 7-6 lead over the Hornets.

The Hornet’s offense looked like they were primed to strike on multiple occasions throughout the second half. However, the Hurricane’s defense stood tall in the red zone when their number was called upon. Most notably in the fourth quarter blocking a field goal that would’ve given the Hornets the lead.

After this stop, the Hurricanes lead a much-needed strong drive. The run game was the catalyst, again, for the offense this drive as they ran through the Hornet’s defense into the end zone. They were able to move the chains with ease while also chewing up precious time. Leaving the Hurricanes leading 14-6.

In the end, the Hurricanes forced an interception in the final moments off of the miscommunication of the Hornet’s quarterback and wide receiver. This would seal the deal, finalizing the Hurricane’s narrow 14-6 victory over the Hornets.

Coach Pollard Thoughts on the Win

Gainesville Hurricane’s Coach Dock Pollard talks about what changed offensively from the first half to the second half.

Pollard discusses how the defense was able to control the game.