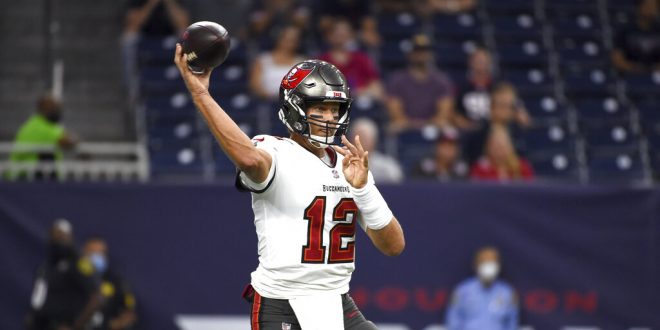 The Tampa Bay Buccaneers will host the Dallas Cowboys to kick off the 2021 NFL season at Raymond James Stadium.

The New and the Old

Another year older and another ring on his hand, quarterback Tom Brady is back for his second season under center in Tampa Bay. The Bucs are the first Super Bowl winning team since 1979 to return all 22 of its starters.

And who could forget about the Brady-Gronk duo? The record-setting pair is expected to make another big impact this season. Here’s what Evans had to say about where the offense is heading into the season.

Most of the defense that shut-out Patrick Mahomes and the Kansas City Chiefs in the Super Bowl are also back, including inside linebacker Devin White. White lead the Bucs defense with 97 tackles and 9 sacks. Edge rushers Shaquil Barrett and Jason Pierre-Paul also played key roles in the Tampa defense, combining for 31 starts and 17.5 sacks in 2020.

The Buccaneers made several additions to the roster during the offseason, including Florida quarterback and Heisman finalist Kyle Trask. Trask was selected at the end of the second round as the 64th overall pick and is set to be backup for Brady.

Tampa added to their dominate defense in the first round, selecting outside linebacker Joe Tryon-Shoyinka with the No. 32 pick. The rookie is already proving his worth, putting on an impressive performance during preseason and gaining the respect of his teammates.

“He’s a beast,” defensive lineman Patrick O’Connor said of Tryon-Shoyinka. “He’s a monster. I think he’s going to be a great asset to our team in all aspects.”

Dak Prescott and the Cowboys are looking to rebound after a disappointing 2020 season. Prescott was on record-setting pace for passing yards last year until he suffered a season-ending ankle injury. He also sat out from most of the Cowboys’ preseason due to a shoulder strain. Despite battling the shoulder injury, Prescott is expected to start Thursday night.

The Cowboys defense is revamped this year with rookie linebacker Micah Parsons and new defensive coordinator Dan Quinn. Parsons had an impressive preseason performance, and will likely be a key component in the Cowboys’ defense.

Bucs receiver Mike Evans said that the Cowboys new defense will be tough, but he’s confident in Tampa’s ability. Evans says this will be a challenge for his squad.

The defending Super Bowl champions get the privilege of playing the first game of the season on the very field where they won Super Bowl LV. But it comes with a hefty price tag.

Fans wanting to watch the big Week 1 matchup in-person will have to pay significantly more than in years past. According to Vivid Seats and a report by ESPN, tickets to Thursday night’s game average $582–the most expensive ticket to a Bucs game in 10 years.

Despite the costly ticket prices, the Buccaneers are expecting a packed stadium for their home opener. The Bucs are returning to full capacity in the 65,000+seat stadium this season.  Additionally, tickets for each of the Buccaneer’s eight home games are completely sold out.