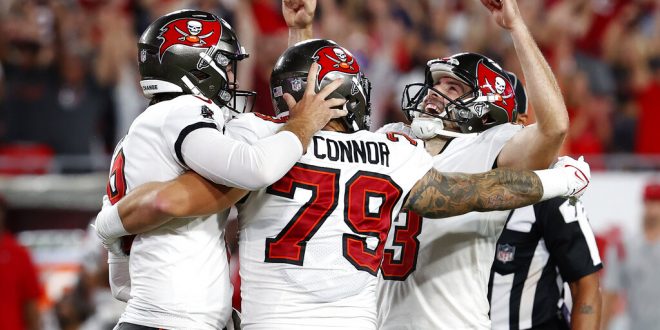 Tampa Bay Buccaneers' Ryan Succop (3) celebrates with Pat O'Connor (79) and Bradley Pinion (8) after kicking what proved to be the game-winning field goal during the second half of an NFL football game against the Dallas Cowboys Thursday, Sept. 9, 2021, in Tampa, Fla. (AP Photo/Scott Audette)

As the Tampa Bay Buccaneers ran out onto the field through two gigantic Lombardi trophies, football fans everywhere rejoiced; the NFL was back. Kicking off the season was Tom Brady and the Bucs’ against Dak Prescott and the Dallas Cowboys.

The two did not disappoint, combining for seven touchdowns and nearly 800 passing yards. In the end, though, the seven-time world champion came out on top, winning a nail-biter for Tampa by a score of 31-29.

As the final score suggests, the game was tight from start to finish. There was no massive comeback from either squad, but rather back-and-forth shots from the offenses. Tampa got the scoring going first, as Brady finished off a long drive with a Chris Godwin touchdown. Dallas quickly responded, though, as CeeDee Lamb hauled in a 22-yard touchdown reception from Prescott less than four minutes later.

Early in the second quarter, Brady would strike again; this time, he threw a dart to a streaking Rob Gronkowski on the goal line to put Tampa back in the lead. Gronkowski would finish the game with 90 yards and two touchdowns, picking up where he left off after a two-touchdown Super Bowl performance.

Prescott found Amari Cooper in the endzone for his second touchdown pass of the night, but the Cowboys were unable to tie the game after kicker Greg Zurlein missed the extra-point kick. Zurlein missed three total kicks in the game, equaling seven lost points for the ‘Boys.

With less than three minutes in the first half, Brady sent a deep ball to wide-out Antonio Brown. Brown, a member of the 2010s All-Decade Team, caught the toss and gave Tampa Bay a five-point lead going into halftime.

The biggest concern that Tampa fans will leave the game with is likely the Buccaneer defense. Despite giving up four touchdowns, the Dallas offense was still more prolific than the box score; the Cowboys were only one-for-four in the red zone, as Zurlein missed two kicks. If Zurlein could have made those kicks, or if Dallas had scored touchdowns in those opportunities, Tampa could have feasibly lost the game.

Despite the struggles, the unit was able to do just enough to let Brady and the offense win the game. Tampa stalled the final drive from Dallas and forced a field goal from Zurlein. The kicker converted the attempt, but it put the Bucs’ within striking distance to win the game with a field goal. They did just that after Brady marched the team down the field, and kicker Ryan Succop nailed the game-winning field goal.

What’s Next for Tampa

After this win, Tampa will remain at home for week two when they will welcome Kyle Pitts and the Atlanta Falcons.

Carson Cashion is a second-year student at the University of Florida, and has a major in journalism with a specialization in sports and media. Originally from the Orlando area, Cashion has covered the UF Gymnastics team as well as Oak Hall athletics for ESPN Gainesville.
Previous Ole Miss Enters Home Opener Against Austin Peay
Next Lady Hurricanes Sweep Saint Francis Catholic Wolves In High School Volleyball