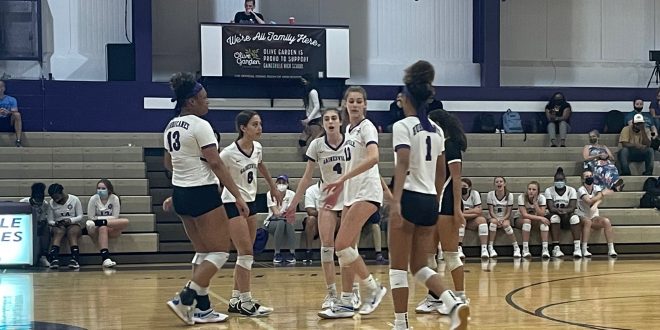 Hurricanes Storm Out the Gate

Gainesville started off the game strong, taking advantage of Saint Francis’ miscommunication and errors. It seemed everything went Gainesville’s way. In the first set, most Lady Hurricane serves to the Wolves netted them a point. The outside hitters feasted on a multitude of well-set balls. When the ball was returned to the Hurricanes, the back row defensively put it right where it needed to be.

Gainesville was dominant all-around throughout the first set. They controlled the tempo and were able to finish it off with ease. Gainesville went on to win this set 25-6 over Saint Francis.

After a near-perfect start to the game, Gainesville got off to a lethargic start in the second set. After some missed opportunities the Hurricanes found themselves down 6-5. A few balls dropped right in between multiple Hurricanes and some were sailed out of bounds.

After this slow start, the Hurricanes of the first set returned and went on a 13-2 run, giving them an 18-8 advantage. Ultimately putting away the Wolves in the second set by a score of 25-14.

In the third set, both teams fought tooth and nail for each point, leading to a back and forth contest. Halfway through the set, the score resided at 13-12 Gainesville. The fight carried on as both teams searched for momentum. After a neck and neck finish to the match, Gainesville came out triumphant over Saint Francis with a score of 25-21.

A culmination of miscues and unforced errors from the Hurricanes led to a much closer battle in the third set than the previous two. Gainesville head coach Chancie Vice said this was a result of lending players the opportunity to get touches and looks at different positions.

Upcoming Week for the Hurricanes

Coach Vice gave her thoughts on the team’s confidence and their upcoming games next week.

“We are always confident regardless of the record. Just because my girls work so hard day in and day out at practice, but confident never cocky. We know we have some really tough games coming up next week. We have a lot of work we are going to put in and we are never going to stop.”

Gainesville starts off next week by traveling to Forest High School on Monday. They finish off the week by facing Santa Fe High School at home in the Purple Palace on Thursday.