The Tigers had a strong start to their season, beating Central Michigan 34-24 at home. Last week, the Tigers lost 35-28 to Kentucky on the road, giving them an overall record of 1-1.

Redshirt sophomore quarterback Connor Bazelak threw for 294 yards and four touchdowns against Kentucky.  In the third quarter Bazelak threw an interception that led to a Kentucky touchdown.

Head coach Eliah Drinkwitz says that Bazelak’s decision making and accuracy has been improving.  Although he wishes he could “take back” that interception, he’s impressed with his performance.

“I thought he did a nice job on some third downs creating yards with his feet which is always important to try to do and so I’ve been impressed with him so far,” said Drinkwitz.

The SEMO RedHawks are currently sitting at 0-2 after back-to-back losses against Southern Illinois and Sam Houston.

Sam Houston dominated the second quarter leading 31-14 by half, and they were able to hold SEMO to 14 for the rest of the game.  The RedHawks ended 14-52, with senior Aaron Alston and senior Geno Hess contributing to their 14 points.

Drinkwitz looks forward to the matchup against SEMO on Saturday, and believes that playing in-state schools builds enthusiasm, energy and competition within the state.

“I think it helps the state football overall.  It helps create energy for your state, it created natural rivalries, it creates enthusiasm about the programs.” 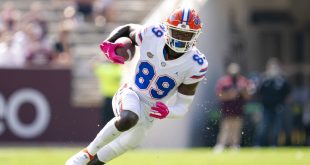 More than a Receiver? When you hear the term ‘wide receiver,’ catching the football and …