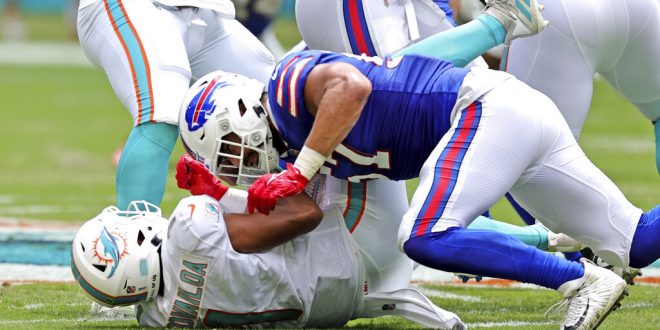 The Miami Dolphins entered Week 2 and their home opener looking like a playoff team ready to make a statement win.  They left week two without their quarterback, and with their worst lose of the Brian Flores Era.  They were shut out 35-0, and Tua Tagovailoa suffered an injury during the 1st quarter.

During the 1st quarter of the Dolphins loss, Tua Tagovailoa was hurt while trying to convert a 4th and 2 just across midfield.  Buffalo defensive end A.J. Epenesa beat Dolphins right tackle Jesse Davis around the edge and got a free shot on the quarterback.  Then, delivering a crushing blow, he nailed Tua as he was delivering the ball.

Tua got hurt on this play.pic.twitter.com/rHkroBLQcc

The pass fell incomplete, and while the rest of the offense jogged off the field, Tua struggled to limp off.  Eventually, he went down to a knee and waited for the help of the training staff.  Initially, it looked as though Tagovailoa was favoring his right hip, sending Dolphins Fans into a panic.  Ultimately, it was determined it was a right rib injury.  Thankfully, the damage was no more than bruising, and the Dolphins’ signal caller is now listed as day-to-day.

With Tua at the helm, the Dolphins seemed poised to make a leap under 3rd year head coach Brian Flores.  Last year, the team was a 56-26 Week 17 loss against guess who, the Buffalo Bills, from making the playoffs.  Even so, they went 10-6, improving from 5-11 the previous year.

Another stride was expected to be made this year, in large part due to the development of Tagovailoa.  Although effective, Tua succeeded last year mostly as a game manager.  He didn’t hurt the team, but he didn’t help much either.  The defense did the majority of the heavy lifting.  This year, Dolphins faithful were hopeful Tua would become the player they thought they were selecting 5th overall and lead the Dolphins to the postseason.  Furthermore, the growth he demonstrated during the preseason gave them every indication that would be the case.

Without Tua, the Dolphins outlook is far more gloomy.  After Tagovailoa’s injury, backup quarterback Jacoby Brissett assumed the position.  He entered hopeful to prove his worth as a starter in the league.

Jacoby Brissett: I don’t refer to myself as a backup QB. I’m always keeping my arm loose. You always got to be ready. Later asked what he thinks of himself as: I’m a starter. pic.twitter.com/M19icCrLCL

Unfortunately, he did little to do so.  Brissett went 24/40 for 169 yards and an interception.  He was unable to put any points on the board.  That said, he had nearly no chance to succeed.

With Tua listed as day-to-day, the Dolphins have little to worry about regarding how his absence will affect their overall season outlook.  Even so, once he returns, they will have to prioritize protecting him or it won’t be long before they are again envisioning their season without him.

Patience.  For bruised ribs, there is nothing a player can do but wait.  It is an extremely painful injury that only heals with time.  Nevertheless, the Dolphins are confident Tua will be back as soon as possible.

William Silverman is a junior at the University of Florida from Philadelphia who is interested in pursuing a career in business, communications and journalism.
Previous Former Gator Mark Kolozsvary Gets Called to the Big Leagues
Next A Look Around the SEC