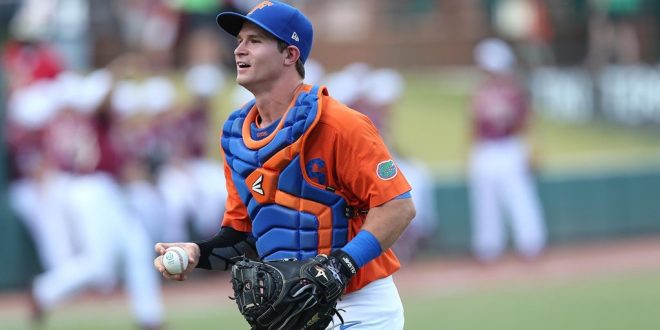 Kolozsvary would become the 78th Gator to play in the MLB and the 26th player to do so under head coach Kevin O'Sullivan with an appearance for the Cincinnati Reds following his Monday call-up to the big leagues. During his time in the minors, he posted 17 home runs, three triples, and 48 doubles. He also recorded 91 RBI's and 112 runs. Credit: floridagators.com

The Florida Gators crafted a Major League Baseball talent in Mark Kolozsvary, who made his way to the Cincinnati Reds’ roster Monday night. Once Kolozsvary plays a game, he becomes the 78th Gator in history to play for an MLB team.

Kolozsvary’s promotion comes after four seasons in the Minor Leagues. In that time, he posted 17 home runs, three triples, and 48 doubles. He also recorded 91 RBI’s and 112 runs to secure an invitation to the majors. The Reds announced Kolozsvary’s promotion via social media on September 20th. Florida baseball was excited to share the news with Gator nation.

Congratulations to Kolo on getting the call to the bigs‼️#GatorMade // #GoGators https://t.co/paTZeVGt9w

Overall, Kolozsvary is having a great year in his professional career. He was a member of USA Baseball’s Olympic Team that took home silver in the summer of 2021. With Team USA, Kolozsvary started as catcher in all six games and helped them to a 4-2 record. After his promotion, USA baseball expressed their support for Kolozsvary on Twitter.

Other Gators in the big leagues

Kolozsvary has a shot at becoming the fifth Florida baseball alumni to premiere in the Majors this season. He would debut alongside former Gators Jackson Kowar (Kansas City Royals), Taylor Gushue (Chicago Cubs) and Kirby Snead (Toronto Blue Jays). Notably, he would be the second Gator rookie on the Reds this year, alongside standout Jonathan India. Kolozsvary and India helped the Gators to a National Championship in 2017.

As a Gator, Mark played in 78 career games and started 39 times. During that time, he had 27 runs, 19 walks, and three stolen bases. Alongside his five homeruns, Mark earned a .992 field percentage and 32 RBI. Kolozsvary played with the Gators through his junior year in 2017. Drafted in 2017 in the seventh round by the Reds, Kolozsvary would forgo his senior season.

With just under two weeks to go in the regular season, Kolozsvary  looks to make an impact for a Reds team that currently sits three games out of the second NL Wild Card spot.