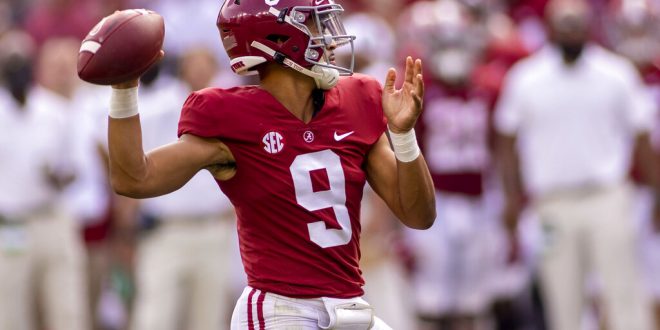 Alabama quarterback Bryce Young (9) throws during the second half of an NCAA college football game against Mercer, Saturday, Sept. 11, 2021, in Tuscaloosa, Ala. (AP Photo/Vasha Hunt)

After a struggle against the Florida defense last week, Alabama looks to show the college football world why they are on top.

Last week the country found out that Alabama is vulnerable. While the team left Gainesville with a win, the Crimson Tide did not look like the dominant presence that they seemed to be. Nick Saban and his team return home this week to play the Southern Miss Golden eagles. This should be good news for Alabama fans. Many of the team’s issues against the Gators in week three came from the venue, which has been named as one of the most hostile environments in college football.

Sophomore quarterback Bryce Young threw for 240 yards and 3 touchdowns, but made enough mistakes to cause some concern for Alabama fans. The team showed a large amount of mental weakness, causing 11 penalties for 75 yards. Saban hopes to improve the team’s discipline and lower the amount of penalties. The team also seemed to slow down in the second half. The Gators outscored the Tide 26-10 in the last three quarters. This needs to improve if the Tide has any hope of a dominant season.

The Golden Eagles have a rough week ahead of them going up against the number one team in the country. Going down to Tuscaloosa is a daunting task, but Southern Miss is preparing for it. This is a staple game for the Eagles, and though they have lost 2 of their first 3 games, Nick Saban had high praise for their defense.

Returning 19 defensive starters is a huge win for Southern Miss. The Eagles are hopeful that their defense can carry the game, as their offense has been lackluster so far. Both quarterbacks have thrown for 1 touchdown each, but 2 interceptions. The offense has been practicing hard this week, however. The team did shut out Grambling St. in week 2, scoring 37 points, which shows that there is an offensive presence on the team.

The game will kick off Saturday, Sept. 25th, at 7:30pm at Bryant-Denny Stadium.