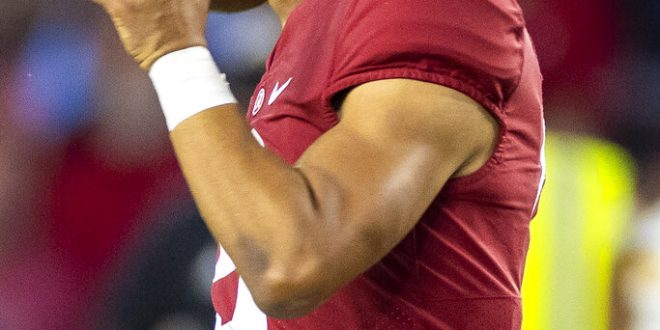 FILE - Alabama quarterback Bryce Young (9) throws a touchdown against Southern Miss during the first half of an NCAA college football game in Tuscaloosa, Ala., in this Saturday, Sept. 25, 2021, file photo. Mississippi's Matt Corral and Alabama's Bryce Young, Southern Californians who ventured across country to the SEC, might just be the early Heisman Trophy front-runners heading into their teams' clash. (AP Photo/Vasha Hunt, File)

The top ranked Alabama Crimson Tide (4-0, 1-0 SEC) host the 12th ranked Ole Miss Rebels (3-0) Saturday in Lane Kiffin’s return to Tuscaloosa. Kiffin, the Rebels head coach, spent two seasons calling the offense for the Crimson Tide and was able to win a national championship under Saban in 2015. But Kiffin is now leading the undefeated Rebels in to Tuscaloosa to try and be the first former assistant coach under Saban to defeat him in his coaching career.

Crimson Tide quarterback Bryce Young and Rebels quarterback Matt Corral highlight the key matchup for the contest. Both quarterbacks have led their respective talented offenses to an undefeated start to the season. Both have been able to stay composed under pressure and come out victorious so far this season.

Young has impressed the college football world so far this season, defeating two ranked opponents in four games. The redshirt freshman has thrown for 1,124 yards, 15 touchdowns and only one interception. Young also holds a 87.7 QBR, placing him at sixth in the nation.

Corral is not far behind, throwing for 997 yards, with nine touchdown passes and zero interceptions. Additionally, Corral has posted an 89.3 QBR, placing him fourth in the nation.

Saban has been impressed with the play from his young Quarterback, touching on how mature he’s been throughout the season.

The Crimson Tide head coach holds a 23-0 record against his former assistant coaches. Even Kirby Smart hasn’t defeated Saban, and he’s been coaching the Bulldogs for five seasons. Smart has possibly come the closest, narrowly falling to the Crimson Tide in the famous 2018 National Championship. However, Kiffin gave Bama a run for their money last season.

The Rebels put up more yards against the Alabama defense than anybody had in last season’s 63-48 loss. Moreover, it was the most points an unranked team had put up against the Crimson Tide and the highest scoring SEC game. Expect Kiffin to give the Saban and the Tide a fight on Saturday, as the contest could potentially be one of the highest scoring affairs of the season.

Despite the possible bad blood left between the two coaches after the departure of Kiffin in 2016, Saban hasn’t forgotten how much of an impact Kiffin left on the program.