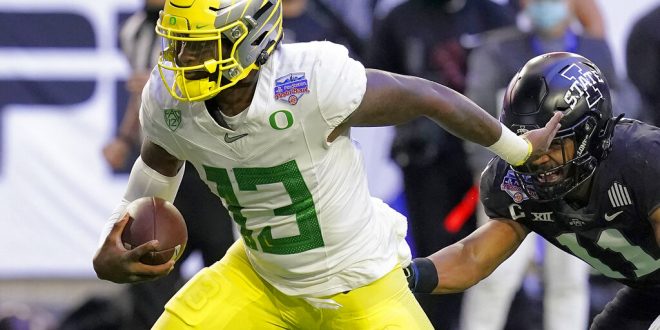 Oregon quarterback Anthony Brown (13) runs for a touchdown as Iowa State defensive back Lawrence White IV (11) defends during the first half of the Fiesta Bowl NCAA college football game in Glendale, Ariz. Brown, a sixth-year senior and the Ducks' presumed starting quarterback, suggested he and the team are stronger after coming together following the delays and cancellations caused by the pandemic in 2020. (AP Photo/Ross D. Franklin, File)

Looking outside of the SEC, several top 25 college football teams faceoff this weekend.

No. 5 ranked Iowa takes on Maryland in College Park. Both teams looking to keep the momentum going and improve their even 4-0 records. In this Big Ten matchup, both enter the Friday game after a short week. On Saturday, Iowa defeated Colorado State 24-14, and Maryland defeated Kent State 37-16.

Looking forward to the game, Iowa head coach Kirk Ferentz knows this matchup will be a challenge. Ferentz acknowledges Maryland quarterback Taulia Tagovailoa’s strengths and growth as a player.

This matchup will take place on Friday at 8 p.m.

Wisconsin hosts No. 14 ranked Michigan. The undefeated Wolverines look for their first win in Madison since 2001. Michigan head coach Jim Harbaugh knows his team will have to face a fast, physical and experienced Wisconsin defense.

Additionally, Michigan will look to their quarterback Cade McNamara for offensive success. This season, McNamara has thrown for 534 yards with no interceptions. Last week, Michigan defeated Rutgers 20-13, and Wisconsin fell to Notre Dame. Kickoff is slated for noon on Saturday.

No. 9 Notre Dame (4-0) hosts No. 7 Cincinnati (3-0) at Notre Dame Stadium. Aldo, both sit undefeated. Notre Dame head coach Brian Kelly knows his team will have to watch out for the athletic Cincinnati quarterback Desmond Ridder.

Subsequently, Notre Dame quarterback Jack Coan is expected to get the start after suffering an ankle injury against Wisconsin last week. Coan has nine touchdown passes this season. Cincinnati comes off two weeks of rest. The well-rested Bearcats look to break Notre Dame’s perfect record. Kickoff is scheduled for 2:30 p.m. on Saturday.

Another top 25 matchup sees No. 3 Oregon take on Stanford. In this Pac-12 matchup, the Cardinals look to pull off a massive upset against the undefeated Ducks. Oregon head coach Mario Cristobal will look for the Ducks to improve and sustain their intensity in their matchup this Saturday.

Previous No.2 Georgia and No. 8 Arkansas Face-Off in SEC Matchup
Next 12th Ranked Rebels Set To Travel to Alabama for Top 25 Matchup