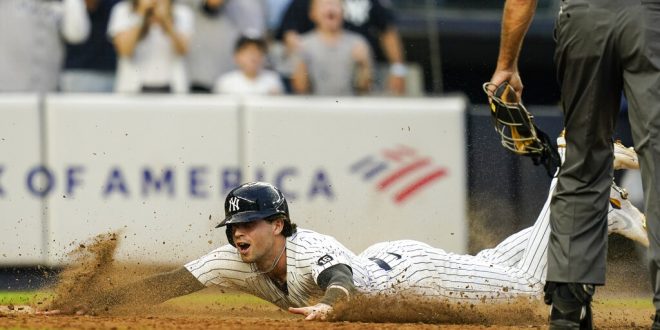 It is that time of year: October. Leaves begin to change colors, wind chill starts to pick up and baseball’s best turn into legends. Rivalries will be both reignited and forged in the fires of October postseason baseball. But each team remaining has the same goal: winning a World Series.

Of the rivalries being renewed, the American League Wild Card will feature one of the most historic rivalries in baseball. The New York Yankees versus the Boston Red Sox. Both teams needed a win in their last game of the regular season and that is exactly what they got. Behind Rafael Devers two home runs to help beat the Washington Nationals, the Red Sox secured its spot in the Wild Card. And after Aaron Judge’s walk-off RBI single, the Yankees clinched a playoff birth in the team’s final plate appearance of the regular season.

THE AL WILD CARD IS SET!

The @Yankees will play the @RedSox at Fenway Park. pic.twitter.com/h5P2kLspkS

The winner of the New York-Boston Wild Card matchup will take on the AL East champions, the Tampa Bay Rays, in the AL Divisional Series. This side of the ALDS is set to be a heavyweight matchup, regardless of which team advances out of the Wild Card round. Both the Yankees and the Red Sox are two of baseball’s most historic franchises while the Rays are one of baseball’s most dominant teams as of late. Despite Tampa Bay being one of the best regular-season baseball teams in recent years, the Rays are still consistently looked at as the underdog.

On the other side of the AL bracket, the AL Central champions, Chicago White Sox, will be taking on the AL West champions, Houston Astros, in the AL Divisional Series. After a strong 90-plus win season for both the White Sox and the Astros, many are looking forward to this series. The Astros will be relying on its heavy bats, especially AL Batting champion Yuli Gurriel’s, to once again bring them to postseason glory. On the other hand, the White Sox will be looking to rely on its bullpen to help Chicago make a run this postseason.

In the National League, there are some interesting storylines. One of those being that the 106-win Los Angeles Dodgers might not make it out of the Wild Card. The Dodgers are going up against the St. Louis Cardinals in the one-game playoff round. This means that the 90-win Cardinals could upset the reigning World Series Champions and advance to face the revived San Francisco Giants in the NLDS.

It's going down in LA Wednesday night! pic.twitter.com/lCPrDepUIR

After many thought 2020 was the Atlanta Braves’ year last postseason, the Braves lost in seven games in the NLCS. Continuing its 25-year streak of no championships. But this year, after winning the organization’s fourth NL East Division Championship in a row, the Braves are looking for redemption. Atlanta’s opponents, the Milwaukee Brewers are looking to make their way to its first World Series matchup since 1982. Behind the young, powerful bat of Christian Yelich, the NL Central Champions are ready to make its first run at immortality.

The 2021 MLB Playoffs consist of three 100-win teams, two teams, out for redemption and one possible World Series Champion. October is officially here and so is postseason baseball. Prepare to see some heroes turn into legends this postseason.