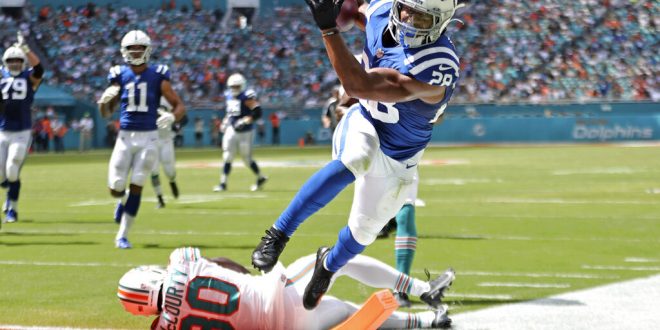 Carson Wentz ended his seven-game losing streak Sunday as he and the Indianapolis Colts defeated the Miami Dolphins 27-17.

Miami took an early 3-0 lead with a field goal by kicker Jason Sanders and held their own on the defense in the first half, as defensive end Emmanuel Ogbah sacked Wentz halfway through the first quarter and linebacker Sam Eguavoen sacked him in the second.

Miami on the offense

Miami rookie wide receiver Jaylen Waddle caught all three of his receptions for a total of 33 yards, and wide receiver DeVante Parker gave a solid performance with 77 receiving yards.

With four minutes left in the game, Parker ran home a touchdown; the 6-point play and the following 1-point field goal weren’t enough to catch up to Indianapolis, however.

Down 14-3 with three minutes left in the third quarter, the Dolphins had a chance to redeem themselves but ultimately gave up the opportunity with a fumble by Miami wide receiver Jakeem Grant; only four minutes later in gameplay, Colts linebacker Darius Leonard picked up Brissett’s dropped ball. Once again, an opportunity lost.

Head coach Brian Flores was frustrated with his team’s performance.

“We played bad across the board. Offense. Defense. Kicking game. Drops. Penalties. Turnovers. We have a lot we have to fix. Offensively we couldn’t get anything going. We have to do a better job, he said.”

He was also disappointed with himself.

Behind by three points for the majority of the first half, Indianapolis came hungry to round out the game.

Colts running back Jonathan Taylor broke the ice with a touchdown with merely two minutes left in the first half, giving the team a three-point advantage. He played hard on the offense as he gave 103 rushing yards throughout the game.

Tight end Mo Alie-Cox came in with a touchdown seven minutes into the third quarter to extend Indianapolis’ lead and ran it back a quarter later to grow the score 26-10. He put up 42 receiving yards throughout the game.

The Dolphins go on to face in-state rival Tampa Bay Buccaneers Sunday at 1 p.m., while the Colts play the Baltimore Ravens next Monday.

Previous Around The NFL Week Four: Cardinals and Cowboys Make Statements
Next October is Here: MLB Postseason is Set