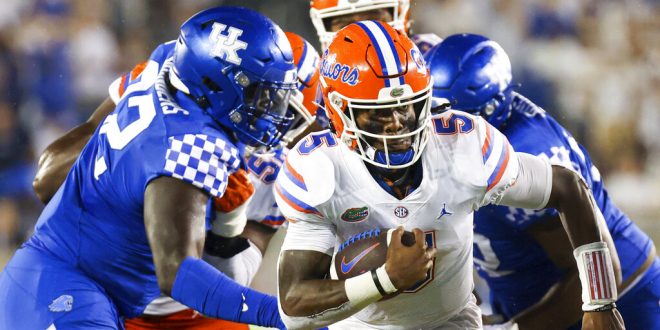 After the incomplete pass on 4th & Goal last week in the final seconds against Kentucky, the Gators road to Atlanta became even harder. A two-point conversion away from overtime against the number one team in the country two weeks prior, and easily beating Tennessee a week before, the Gators season seemed to come down to the game in Jacksonville.

However, the loss to Kentucky now forces the Gators to beat Georgia in three weeks, and hope the Bulldogs lose a regular season game. To be completely honest, it doesn’t look great right now. But this week, the 20th ranked Gators hope to bounce back against the Vanderbilt Commodores Saturday, in the teams annual homecoming game.

The Commodores are off to a decent start to the season, defeating Colorado State in week two and UConn last week in a nail biter. Ken Seals leads the Vanderbilt offense under center, passing for 894 yards and five touchdowns so far this season.

Vanderbilt head coach praised the Gators run game, saying how difficult it was to defend all 11 positions on the offensive side.

Vanderbilt ranks 112th in the FBS in total defense. They give up 447.2 yards per game while giving up 6.54 yards per play. The Gators lead the SEC in rushing yards per game, averaging 292.4 rushing yards. Expect the Gators to pound the run game, as they do for most games and dominate the Vanderbilt front seven.

Moreover, Vanderbilt ranks second to last in passing per game and third to last in rushing per game. Hopefully the Gators defense can dominate the Commodores offense, making the game an enjoyable homecoming for alumni and fans.

Gators Need to Tighten Up Penalties

In the Gators first SEC road game of the season with a packed stadium, the team struggled with penalties. The Gators committed 15 penalties for 115 yards, being flagged for false start 8 times. Mullen said part of the reason was that his players have never played in a true SEC environment on the road before.