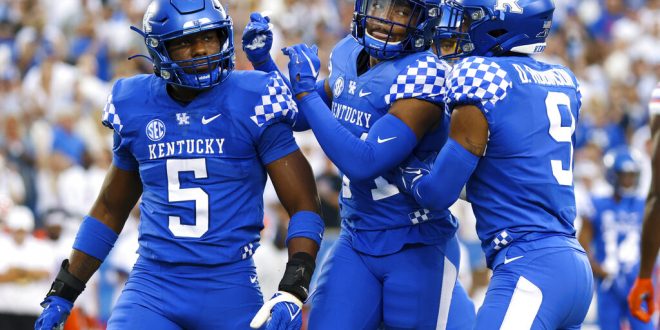 Kentucky linebacker DeAndre Square (5) celebrates after making a tackle during the first half of an NCAA college football game against Florida in Lexington, Ky., Saturday, Oct. 2, 2021. (AP Photo/Michael Clubb)

The undefeated Kentucky Wildcats will host the LSU Tigers on Saturday at 7:30 p.m. The game will broadcast on SEC Network.

The Wildcats jumped all the way to No. 16 in the AP Top 25 after their upset win over the then No. 10 Florida Gators last Saturday. Kentucky was able to capitalize on a blocked kick, which they returned for a touchdown, midway through the third quarter.

The play would give Kentucky their first lead of the game. The Wildcats would not give it back as they defeated Florida 20-13.

Head Coach Mark Stoops had this to say about his team’s performance last week:

The Gators came into the game averaging over 300 rushing yards a game. That number was cut almost in half as the Wildcat defense allowed just 171 rushing yards. In five games, Kentucky has only allowed more than 150 rushing yards twice (Florida and Chattanooga). Other than those games, the defense has stopped the run.

This caused the Gators to throw the ball, which was problematic because the crowd was deafening. The Gators accumulated eight false starts. The clap count was not working.

Stoops said he’s excited that the LSU game is at home.

The Wildcats have a balanced attack with 1,041 passing yards and 946 rushing yards.

While undefeated, Kentucky has a turnover problem. Quarterback Will Levis has thrown six interceptions in five games, including one last week.

PICKED OFF!!! An overthrow becomes property of Tre’Vez Johnson and the #Gators have it deep in Kentucky territory pic.twitter.com/aRD4vTdrCk

As a team, the Wildcats have fumbled 12 times and lost half of them.

The offense is going through some growing pains under first year Offensive Coordinator Liam Coen, who was previously a wide receivers and quarterbacks coach with the Los Angeles Rams.

Stoops said he understands that the offense is a work in progress.

Kentucky will be sticking to the game plan on Saturday

The Tigers have had an up and down season. Before the season started, LSU was ranked No. 16. But after a loss to UCLA in week one, the Tigers have found themselves outside of the AP Top 25.

LSU responded to the loss by rolling off three consecutive wins. That streak ended last week with their loss to then No. 22 ranked Auburn. LSU has lost each of their games in which one of the teams was ranked.

With Kentucky now ranked t No. 16, this could be troublesome. In fact, the next six games are against ranked opponents. After Kentucky, LSU plays N0. 20 Florida, No. 17 Ole Miss, No. 1 Alabama, and No. 13 Arkansas in that order.

Head Coach Ed Oregeron said a tough schedule is what it takes to be a champion.

With two losses already this season, their championship outlook is dim.

Scoring is not an issue for the Tigers. LSU is averaging just over 30 points a game this season.

However, against better opponents the defense has struggled. In week one against UCLA, the Tigers gave up 38 points and 440 yards of offense. Last week against Auburn, they gave up 24 points and 453 yards.

However, Oregeron still believes the team has time to improve this season.

The good news for the Tigers is that they don’t turn the ball over often. Quarterback Max Johnson has thrown four interception to go along with his 16 touchdowns. The Tigers have yet to lose a fumble.

Trey is a third year sports media major at the University of Florida, and a WRUF reporter.
@@treyboogie5
Previous Tre’Vez Johnson Talks Gators D
Next This week in local high school football