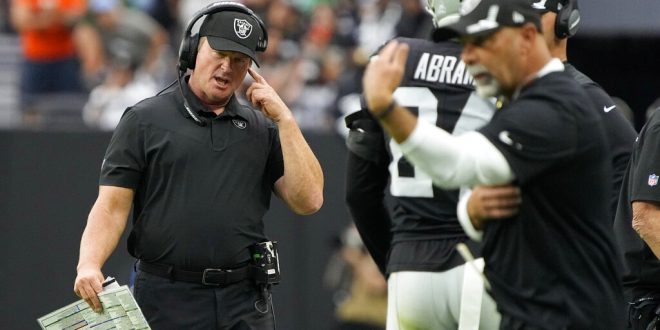 Las Vegas Raiders head coach Jon Gruden speaks on his headset during the first half of an NFL football game against the Chicago Bears, Sunday, Oct. 10, 2021, in Las Vegas. (AP Photo/Rick Scuteri)

Jon Gruden has officially stepped down as the Raider’s head coach. The announcement comes after multiple reports of racist, homophobic, and misogynistic emails sent by him over a 10-year period. The messages were exposed during an NFL investigation into misconduct with the Washington Football Team. Gruden gave a statement saying, “I love the Raiders and do not want to be a distraction. I’m sorry, I never meant to hurt anyone.”

"I have resigned as Head Coach of the Las Vegas Raiders. I love the Raiders and do not want to be a distraction. Thank you to all the players, coaches, staff, and fans of Raider Nation. I’m sorry, I never meant to hurt anyone."

Furthermore, Gruden discredited the rise of female referees in the league. After Shannon Eastin and Sarah Thomas became NFL officials in 2012 and 2015, Gruden responded to a sexist meme by Hooter’s co-owner, Ed Droste. He replied, “nice job Roger” to the post in 2017.

The extent of messages sent by Gruden go beyond his anti-gay and misogynistic remarks. He also criticized All-Pro defensive back Eric Reid. Gruden said Reid should be fired for protesting during the national anthem. Additionally, he denounced a 2015 bill that called for the former Washington Redskins to change their name. Gruden also made questionable remarks about black NFL executive director DeMaurice Smith. Gruden stated, “Dumboriss Smith has lips the size of Michelin tires.” He recently told ESPN that the comment was a reference to being dishonest. He said, “I’m ashamed I insulted De Smith. I never had a racial thought when I used it.”

Jon Gruden recently owned up to his offensive email claims. In an interview on October 10th , he rejected the racist claims against him. He also gave apologies to the people targeted in his messages.

Aside from addressing the reports publicly, Gruden has also been honest with the team. Quarterback, Derek Carr has shown an immense amount of support towards Gruden. Carr praises Gruden’s honesty and says he has his back. In a public statement, Carr discusses conversation between Gruden and the players:

Other players have also expressed opinions on Gruden’s resignation. Raiders running back Josh Jacobs says he still stands by him, despite the harsh truths in the email reports. He believes people can change and has not lost trust in his former coach.