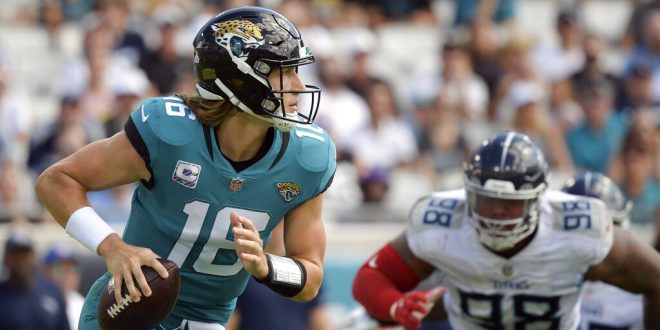 The Jacksonville Jaguars (1-5) got its first win of the season against the Miami Dolphins (1-5) in London Sunday morning. The Jaguars profited off of a late fourth-quarter Hail Mary to get in field goal range to secure the game 23-20. The win ended Jacksonville’s 20-game losing streak, the second-longest in league history.

#DUUUVAL, this one’s for you. pic.twitter.com/5SckFN7wPg

Miami Takes the Lead for the First Half

The Dolphins were the first to get on the scoreboard. On its first drive for 75 yards, Miami quarterback Tua Tagovailoa threw a six-yard pass to wide receiver Jaylen Waddle at 7:45. About four minutes later, the Jaguars followed up with a 40-yard field goal by kicker Matthew Wright. The end of the first left the game 7-3 Dolphins.

Miami was deep in Jaguars territory at the start of the second. A 10-yard offensive holding penalty pushed the Dolphins to Jacksonville’s 20-yard line, forcing Miami to go for a field goal. Dolphins kicker Jason Sanders launched the football for the 33-yard field goal, now 10-3 Miami. Both teams traded punts before the Dolphins extended its lead with another Sanders field goal. Tagovailoa drove the ball for 32-yards to set Sanders up for the successful 24-yard attempt at 5:38.

Quarterback Trevor Lawrence and the Jaguars weren’t about to go to halftime empty handed. With 40 seconds left in the second, wide receiver Marvin Jones Jr. caught a 28-yard pass from Lawrence to make it a three-point game. Miami tried to follow up before the halftime clock ran out, but Sanders 58-yard field goal attempt was no good.

The third quarter gave Jacksonville a leg up over Miami. On the only scoring drive of the quarter, running back James Robinson went on a one-yard rush to the end zone to give the Jaguars their first lead of the game at 17-13.

The Dolphins regained the lead in fourth, however, after a second Waddle touchdown at 10:22, now 20-17. Wright was able to tie up the game with a 54-yard field goal after Lawrence drove the ball down field 44 yards.

The Jaguars got the ball back with 1:42 left in the game. On fourth and eight at Miami’s 44-yard line, the Dolphins called its final timeout with five seconds remaining. This timeout changed the Jaguars game plan from a deep end-zone pass to a 53-yard field goal attempt. Wright’s kick went through through the goal posts to give the Jaguars their first win of the season, 23-20.

The Jaguars have a week off before their match-up against the Seahawks on Oct. 31 while the Dolphins battle the Falcons on Sunday.

Kaitlyn Wadulack is a third-year journalism student specializing in sports and media at the University of Florida. You can reach Kaitlyn at k.wadulack@ufl.edu
Previous Florida Volleyball Sweeps Aggies
Next Oak Hall Dominates St.Francis Catholic On Senior Night