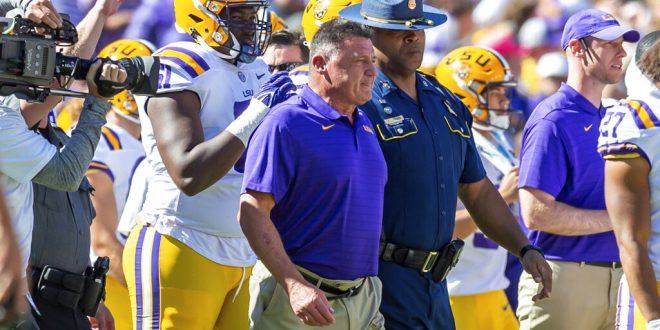 LSU head coach Ed Orgeron is escorted onto the field after LSU's 49-42 win over Florida in an NCAA college football game, Saturday, Oct. 16, 2021, in Baton Rouge, La. LSU and coach Orgeron have agreed to part ways after this season, according to multiple media reports Sunday, Oct. 17, 21 months after he led the Tigers to a national championship with what is considered one of the greatest teams in college football history. (Scott Clause/The Daily Advertiser via AP)

LSU football head coach Ed Orgeron is set to part ways with the program after the 2021 season. The announcement of his departure came less than a day after LSU’s 49-42 win over the Gators Saturday. The unranked Tigers now sit 4-3 for the season and takes on the 5-1 Mississippi Ole Miss Saturday.

Orgeron was the head coach for LSU when it won the National Championship in 2019, though many believe that Heisman Trophy winner and star quarterback Joe Burrow was at the head of the win.

Orgeron since the National Championship

LSU has built a shaky 9-8 record ever since the championship.

“The last two years hasn’t been the standard for LSU,” Orgeron said. “I knew that it was time.”

Orgeron plans to take time off from coaching altogether.

The head coach also faced problems off the field during his tenure. Gloria Scott, a security guard for the New Orleans Super Dome in 2017, was allegedly approached by former LSU running back Derrius Guice during a game in December 2017.

“I like having sex with older women like you,” Guice said, according to Scott. “I want your body.” She testified in front of the Louisiana Senate select committee.

Orgeron called Scott and offered to have Guice apologize.

Orgeron denied the allegations that the two spoke directly on the matter. And instead of testifying in person, Orgeron submitted a written statement to the committee.

“She, along with this Committee, has my word that I will continue to be vigilant in ensuring that the LSU football program maintains a culture of integrity and compliance,” he wrote.

Orgeron was also a part of a Title IX lawsuit against LSU in June for rape allegations.

Ashlyn Robertson said to her boyfriend, an LSU recruit, that Guice raped her.

Orgeron denied ever saying that. He did not report the incident to the Title IX office, according to the lawsuit. Orgeron will still receive the $16.95 million left on his contract, per the agreement with LSU. He holds a six-year contract with the Tigers that started in January 2020 and is the second-highest paid coach in the FBS behind Alabama head coach Nick Saban.