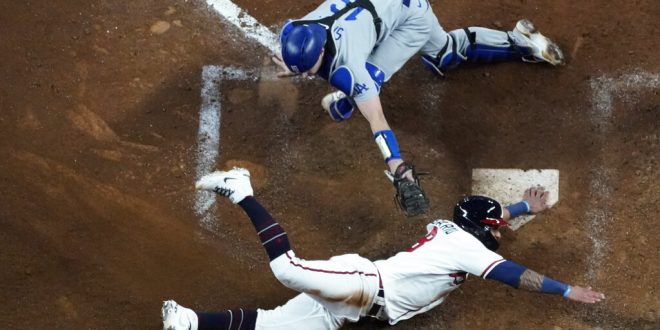 Los Angeles Dodgers catcher Will Smith can not make the tag on Atlanta Braves' Eddie Rosario scores on a single by Ozzie Albies in the eighth inning in Game 2 of baseball's National League Championship Series Sunday, Oct. 17, 2021, in Atlanta. (AP Photo/Brynn Anderson)

As the MLB playoffs continue, the excitement of October continues as well. Going into the NLCS, many were doubting the 88-win Atlanta Braves in a series against the 103-win Los Angeles Dodgers. But as Game 3 of the NLCS approaches, the Atlanta Braves head to Los Angeles with a 2-0 lead. With two walk-off wins to start the series, the Braves look to capitalize on the momentum built as the series now heads to Los Angeles for games three and four.

Despite the 2-0 lead for the Braves, their biggest bat has been slumping as of late. 2020 NL Silver Slugger, Freddie Freeman, has struck out seven times so far in the NLCS. Four times in Game 1 and three more times in Game 2. With Freeman slumping, the rest of the Braves lineup has stepped up big time. One hitter in particular, Joc Pederson, former member of the Los Angeles Dodgers and the Dodgers’ 2020 World Series Championship team, has electrified the plate. Pederson has been the hottest-hitting bat in the Braves lineup this October. And with a big homecoming for the right fielder going back to Los Angeles for what could be the final two games of the NLCS, Pederson looks to help propel the Braves to the 2021 World Series.

The Dodgers’ pitching rotation was one of the team’s biggest strengths throughout the 2021 season. However, the NLCS has been a different story. Although Los Angeles has an incredibly deep bullpen, the team’s bullpen has been struggling as of late. The Dodgers went through eight different pitchers in Game 1 and seven different pitchers in Game 2. If the Dodgers want to make it out of Los Angeles this week, their bullpen needs to find a spark soon as the Dodgers finding themselves down 2-0.

The NLCS has not been short of exciting this year. Both of the first two games came down to the final at-bat and ended in walk-off fashion. With the series now moving to Los Angeles for the next two games, the electricity of playoff baseball is destined to be traveling to California as well. For Atlanta, third basemen Ozzie Albies attributed part of the team’s success to the energy Braves fan have been brining to games. Now with the series headed to Los Angeles the question is: will October baseball create more legends once again?