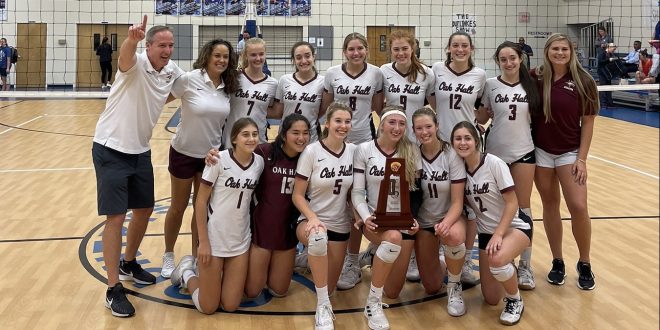 In the biggest game of their season, the Oak Hall Eagles (18-8) took on the St. John’s Country Day Spartans (17-4) in the 2A District 4 Championship Game. The Eagles defeated the Spartans 3-0 to win the district championship and advance to the regional quarterfinals.

The Eagles were coming off of a 3-0 dominant win against Countryside Christian in the district semifinals. The Spartans also dominated in the semi-finals, defeating Christ’s Church Academy 3-0. This was set to be a huge matchup. Oak Hall’s head coach Perry McDonald discussed his team’s strategy coming into the playoffs and how they prepared for this matchup.

Strong Start For The Eagles

Senior Sophia Aulisio opens up the game with a quick ace to build the momentum for Oak Hall. The Eagles got a few early blocks at the net that put pressure on the Spartans hitters. There was an obvious improvement in their blocking from their last regular-season game.

The first set featured a very back and forth game that had been tied for the start. The Eagles went on a small run to take a 12-8 lead. This forced the Spartans to call a timeout.

However, this timeout didn’t slow the Eagles down as they continued to build up their lead, going up 20-8. The Spartans failed to score another point because of how powerful the Eagle’s offense was. Oak Hall closed the set strong and won with a final score of 25-8.

The Spartans came into the second set motivated and had a much better start. They hit the ball well and stayed composed. The Spartans took an early 10-4 lead and forced the Eagles to call a timeout.

Coming out of the timeout, the Eagles struggled to gain any momentum. They messed up on a few serves and struggled to defend the Spartans’ dominant attack.

Regardless, they didn’t give up and went on a strong six-point run that tied the game at 14-14, and caused the Spartans to call a much-needed timeout. The Eagles continued to play great volleyball and brought the score to 20-15.

After back and forth play, the Spartans fight back and make it a close one, 22-21 to the Eagles. After making a great comeback, the Eagles snuck away with a 25-22 win for set two. They were one set away from winning it all.

Oak Hall started the third set off with three great offensive plays that had the Spartan’s defense scrambling. They continued to play discipline volleyball, as they took an early 9-3 lead.

Everything was working for the Eagles during this set, as yet again, Captain Sophia Aulisio absolutely dominated the Spartans defense. She led the Eagles to a 16-4 lead in this crucial set.

After a few late points by the Spartans, The Eagles eased their way to victory 25-12 to win set 3 and win the district championship.

Looking Ahead to Regional Playoffs

This District Championship victory for Oak Hall was significant as it was their first in a little over a decade. They aren’t satisfied yet, as they have regional playoffs in the weeks to come.

Coach McDonald emphasizes what being first in the region means to his team and how it will help them on their quest to a state championship.

Previous Hurricanes Dominate on Homecoming
Next Heat blow out Bucks, 137-95