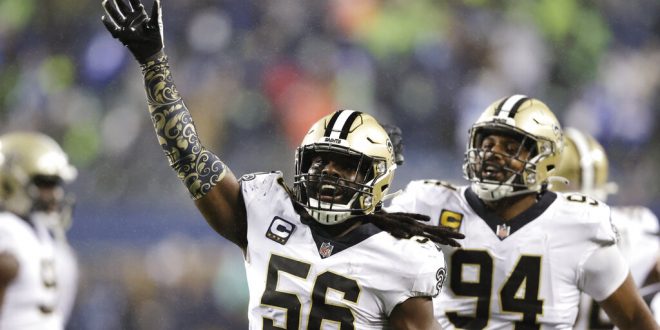 New Orleans Saints' Demario Davis (56) reacts after breaking up a pass intended for Seattle Seahawks' DK Metcalf in the final minute of the second half of an NFL football game, Monday, Oct. 25, 2021, in Seattle. (AP Photo/John Froschauer)

The Seattle Seahawks had a rough start to their week, losing 13-10 against the New Orleans Saints Monday evening. The Seahawks, who are now 2-5 on the season and 0-3 in home games, sit in last place of the NFC West. Meanwhile, the Saints improve their record to 4-2 and rank second behind the Buccaneers in the NFC South.

Although New Orleans earned a win in Seattle, there’s still a lot of potential for the Seahawks to come back this season. Their best shot at success; strengthening their offense. With star quarterback Russell Wilson on the bench due to a finger surgery, Geno Smith got his second start with the Seahawks.

Smith opened the game with a deep pass to DK Metcalf for 84 yards and a touchdown less than five minutes after kickoff.

However, the veteran backup was unable to get the ball to the end zone again. He was sacked by the Saints five times and only completed 12 of 22 pass attempts. The only other points Seattle put on the board came from Jason Myers’ 50-yard field goal in the third quarter but he also missed his two other field goal attempts.

With Russell Wilson out for potentially three more weeks, his value on the team has become evident. Even Coach Pete Carroll made remarks about Wilson in a postgame press conference.

But until then, the team’s offense will have to step up as they rely on Smith to get the job done.

A large portion of the Saints success came from Alvin Kamara. The star running back had 30 touches, 179 yards, and a touchdown. Kamara caught 10 out of 11 of his targets in what became his record-breaking game. He is now the fastest player in NFL history to reach 3,000 rushing and receiving yards.

But aside from Kamara’s strong game, the Saint’s were far from perfect throughout the night. Quarterback Jameis Winston was sacked twice during the game. Additionally, the Saints only converted two first downs out of 13 attempts. The rest of New Orleans’ points came from the consistency of rookie kicker Brian Johnson. He nailed both of his field goal attempts from 21 and 33 yards.

On the defensive end, linebacker Demario Davis had a phenomenal game. He had 10 tackles, two sacks, four tackles for loss, three quarterback hits, and a pass defensed.

Is there an argument for anyone besides #Saints LB Demario Davis being NFL player of the week?

The New Orleans Saints will be heading back home in hopes of beating the Tampa Bay Buccaneers. Tampa Bay has won four straight and will be ready for the action on Sunday. Meanwhile, the Seahawks will be staying home to take on the Jacksonville Jaguars, who are coming off of a Week 7 bye.