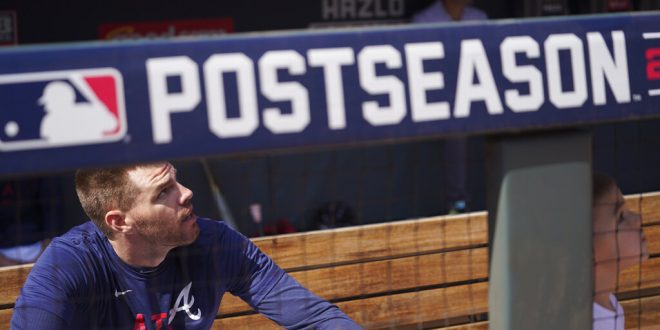 Atlanta Braves' Freddie Freeman sits in the dugout with his son, Charlie, far right, during a workout ahead of the NLCS playoff baseball game, Thursday, Oct. 14, 2021, in Atlanta. (AP Photo/Brynn Anderson)

The 2021 World Series could be the last time MLB fans see baseball for a while.

Enjoy the WS, because come December MLB is going to get very, very interesting.

With the Collective Bargaining Agreement (CBA) set to expire in Winter 2021, there are unknowns clouding the 2022 offseason. Essentially, a CBA is a written contract between an employer and a union representing the employees. Surely, the MLB’s owners and MLB Players Association (MLBPA) have come to a standstill on a host of issues. So, it’s becoming likely the league sees its first work stoppage since the 1994-1995 player strike. With that being said, the pressure is on to negotiate a new agreement before the Dec. 1 deadline.

It’s Been a Long Time

The MLB has prided itself on continuing work. Since the first CBA was ironed out in the 1960’s, the league has faced relatively few work stoppages.  Specifically, there have been eight work stoppages in major league history. Further, the most recent one came through a player strike seen in 1994-1995. In 1994, the MLBPA announced it would be going on strike beginning on Aug. 12. From there, no more games were played in the 1994 season, with the World Series being canceled for the first time since 1904. Moreover, this became the longest lockout in major sports history until the 2004-2005 NHL lockout.

Therefore, the MLB is facing its potential first lockout in over 25 years. With no solution in sight, owners and players alike are prepping for a dramatic stoppage that has wide-ranging implications on the future of the major leagues.

The question begs, why now? Well, there isn’t a specific issue prevailing above the rest. However, there are a few issues which are preventing this agreement from getting done.

Among the issues is a dwindling share in league revenue. Normally, the players and owners have a 50/50 revenue split. However, due to the pandemic teams lost around $1 billion, which has forced owners hands into lowering the total revenue share for its players.

Other issues include the “tanking” phenomenon in baseball. As of late, teams have begun gutting its rosters in hopes of acquiring assets towards rebuilding. Yet, critics argue this downplays the level of competition and is bad for the game. Additionally, players are frustrated with service time manipulation by clubs. Significantly, players have their time in the Major’s manipulated for various reasons as a club. But, this affects the players salaries, so they have a grievance with this tactic.

Unless the MLBPA and MLB come to terms by Dec. 1, the winter meetings will be canceled and a lockout will seem imminent. Time will tell on when a solution comes, but for now baseball fans should enjoy the World Series, as it may be the last professional baseball for a while.

Sam Petosa is a Journalism major pursuing a Specialization in Sports and Media at UF. The South Florida native produces daily shows for WRUF, including "Sport Scene with Steve Russell, and "The Tailgate." In addition, Sam provides weekly sports updates for WUFT News and radio Sportscenter's for WRUF radio. Sam has been a writer at ESPN Gainesville since January 2020.
@sampetosa5
Previous Lightning lose again as they Look to Cure Cup Hangover Against Penguins
Next Saints Edge Out Seahawks On Monday Night Football