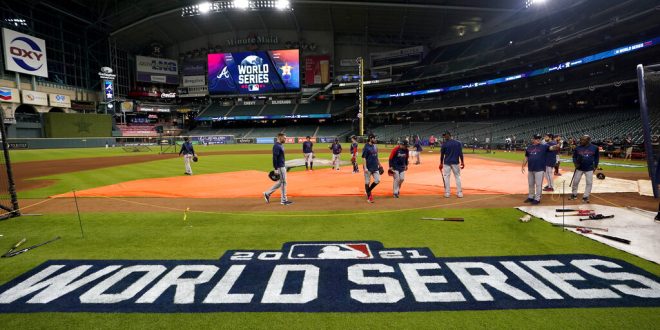 Journey for the Braves

The Atlanta Braves opened the season predicted to finish fourth in the NL East, despite having won the division three years in a row. The Braves found themselves off to a slow start to the season. A struggling lineup, followed by a struggling bullpen, contributed to the team being under .500 for the entire season until mid-August.

Atlanta was also to host the 2021 Allstar Game, however, that honor was stripped away by Major League Baseball in response to Georgia’s new voting laws. In May, outfielder Marcell Ozuna broke several fingers while sliding into third at Fenway Park. After being ruled out for multiple weeks, it was made public he was arrested following a domestic violence issue with his wife. Injuries continued to plague the Braves. They lost star outfielder Ronald Acuña Jr. to a season-ending ACL tear in Miami. Mike Soroka also re-tore his Achilles he was still recovering from. Both remain out until 2022.

The Braves were forced to rebuild their outfield. Before the trade deadline, they acquired Joc Pederson, Adam Duvall, Jorge Soler, and Eddie Rosario. All have contributed mightily to the Braves postseason run, most notably Rosario after winning the NLCS MVP honors. The restocked team found their groove in August, climbed over .500 and ended up winning the NL East for the fourth year in a row. Despite having the worst record of any division winner, they took down the Brewers in four games the defending-champion Dodgers in six and are now in the World Series for the first time in 22 years.

Journey for the Astros

The Astros are in the World Series for the first time since the sign-stealing scandal was made public. Prior to the season even starting, they lost their ace Justin Verlander to Tommy John Surgery. Despite hopes to return during 2021, Verlander will have to wait until 2022 to pitch again. Despite the setback, Lance McCullers Jr. stepped up alongside Zack Greinke to lead the rotation. The Astros’ lineup has been loaded this season, as expected. They led the American League in average, runs scored, hits, and on-base percentage.

The Astros had a quietly effective season. Quiet in all except for the boos the team endured in their road games. With this being the first season with fans in the seats since the sign-stealing scandal was publicized, fans across the league were eager to let them have it. In a game in Anaheim early in the year, a fan tossed an inflatable trash can on the field. The much-anticipated game in the Bronx saw Yankee fans unleash the loudest booing they could. Dodger fans amassed inside Minute Maid Park, all chanting “cheaters.”

Despite the adversity, the Astros handily won the AL West for the fifth-straight season. They defeated the Chicago White Sox in four games and the Boston Red Sox in six to reach the Fall Classic.

Atlanta is throwing their righty ace, Charlie Morton, for game one. This will mark Morton’s fourth start of the postseason, where he has tossed 14.1 innings with a 3.77 ERA and 19 strikeouts. The irony is Morton pitched for the Astros when they won in 2017. Now he pitches against the organization with which he won his first World Series. On top of that, this marks the second year in a row Morton will pitch in the World Series after reaching it last year with the Rays.

On the other side, the Astros start the 27-year-old lefty Framber Valdez. With Lance McCullers Jr. out for the World Series and Zack Greinke having been limited to a bullpen role, the Astros’ rotation will have to turn to younger arms. This will also be Valdez’s fourth start of the postseason. Valdez pitched 15 innings with a 4.20 ERA and 13 strikeouts so far this postseason. He now makes his World Series debut tonight.

The starting lineups for both teams have not been announced. For the Braves, they have the options of Eddie Rosario and Jorge Soler for the leadoff spot. The next three will likely be Freddie Freeman, Ozzie Albies and Austin Riley. Rounding out the bottom will likely be Adam Duvall, Travis d’Arnaud, Joc Pederson, and Dansby Swanson. The bats to look out for are the NLCS MVP Eddie Rosario and the rising star Austin Riley, who made a name for himself after a breakout season. You also cannot overlook Freddie Freeman, who has served as a pillar of the franchise since 2010.

The Astros will likely remain with a similar lineup to what they have used all postseason. Jose Altuve has led off, followed by Michael Brantley, Alex Bregman, Yordan Alvarez and Carlos Correa. Then the bottom features Kyle Tucker, Yuli Gurriel, either Chas McCormick or Jose Siri in centerfield, and finally Martin Maldonado behind the plate. The Astros’ main bat to watch has to be Yordan Alvarez after he took the ALCS MVP and has batted .441 in the postseason. Jose Altuve and Carlos Correa cannot be overlooked. yet the same can be said for most of the hitters in their deep lineup.

Final Outlook and Where to Watch

Both teams have so much to play for. On top of this being the World Series, each team is coming with something to prove. The Braves are here to show their resilience. After many casts had them out of the playoff picture at July’s end, the Braves stood tall. After everything this season has thrown at them, they now get to play for all the marbles. The Braves now look to win their first World Series since 1995.

For the Astros, it is about putting all of the doubts of the 2017 season to rest. They have faced calls of having their 2017 title stripped and were heckled in every road game. With all that behind them, nothing would please the Astros more than lifting the Commissioner’s Trophy above all of that. The Astros now attempt to win their second World Series in five years.

Game one takes place at Minute Maid Park in Houston. First pitch is set for 8:09 p.m. with live coverage being provided on ESPN radio.

Jack Shivertaker is a senior at the University of Florida pursuing a degree in Journalism with a focus on sports media.
@JackShivertaker
Previous Saints Edge Out Seahawks On Monday Night Football
Next DC Todd Grantham Vows to Stay the Course