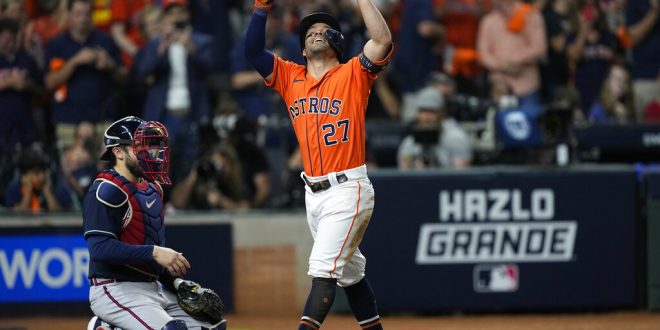 Houston Astros' Jose Altuve celebrates after a home run during the seventh inning in Game 2 of baseball's World Series between the Houston Astros and the Atlanta Braves Wednesday, Oct. 27, 2021, in Houston. (AP Photo/David J. Phillip)

The Houston Astros defeated the Atlanta Braves 7-2 Wednesday night in Game two of the World Series. The matchup is now tied 1-1 as the series moves to Atlanta for Games 3 and 4.

It only took five pitches for Houston’s lineup to figure out Braves ace Max Fried. Leadoff batter Jose Altuve hit a double to left and scored on a sac fly to give the Astros a one run lead in the first. Atlanta’s Travis d’Arnaud sent a solo shot to left field to even the score in the top of the second, but that’s as close as the Braves would come to narrowing the Astros’ lead.

Additionally, Houston’s offense came alive in the second inning with a trio of RBI singles and aggressive base running. Jose Siri used his speed to outrun an infield groundball, allowing Kyle Tucker to score and Yuli Gurriel to advance to second. Martin Maldonado kept it rolling with a RBI single to left, but a Braves throwing error allowed another run to score on the play. The Astros would extend their lead once again on a RBI single to right, putting them ahead 5-1.

The Astros added an additional run in the sixth, assisted by another Braves fielding error. Then, Altuve crushed his 22nd career postseason home run in the seventh inning, sealing Houston’s 7-2 beating of Atlanta. The homerun tied Bernie Williams for second place all-time in postseason homers. Altuve said it means a lot to him to hear his name compared to other baseball greats.

Shallow fly balls and bouncing grounders rattled Atlanta’s defense early on. Eddie Rosario fielded a ball in left field, but threw it to an empty third base which allowed an extra run to score. On the next batter, a wild pitch by Fried allowed Maldonado to steal third. Additionally, the Astros seemed to find every hole and gap in the Braves shifted defense, recording five hits and four runs in the second inning.

Fried had thrown 43 pitches in just two innings, nearly making it through the entire Houston lineup twice. He settled down after that disastrous second inning, retiring 10 straight Astros batters and striking out five of them.  Though visibly frustrated at times, Fried stayed focused and went on to pitch into the sixth inning.

“It’s baseball. Sometimes the ball gets hit and goes right to a guy. Sometimes it doesn’t. Sometimes it finds a hole,” Fried said. “He did a really good job of seeing where we were positioned and staying inside it and just being able to beat it. Sometimes you just have to tip your cap.”

Braves Manager Brian Snitker was not critical of Fried’s performance, saying the bottom of the second was a “weird inning” that could’ve easily had a different outcome.

The errors continued into the sixth, when Ozzie Albies dropped the throw to second on the transfer of turning a double play. The Braves challenged the call, but the ruling remained the same.

Astros starter Jose Urquidy recorded all three outs in the first inning, sitting down three of Atlanta’s hottest bats. Urquidy struck out Eddie Rosario swinging to start the game. He followed that up by getting Freddie Freeman and Jorge Soler looking at strike three. Urquidy is the first Astros pitcher to throw three strikeouts in the first inning of a World Series game.

The momentum rolled over into the second, as he got Joc Pederson swinging for his fourth strikeout in just six batters. Urquidy held Atlanta until the fifth inning when Freeman hit a two-out single to give the Braves their second—and final—run. He finished the night with seven strikeouts in five innings pitched and a 3.60 ERA.

The series moves to Atlanta for the next two games. Game three is scheduled for 8 p.m. Friday night at Truist Park.