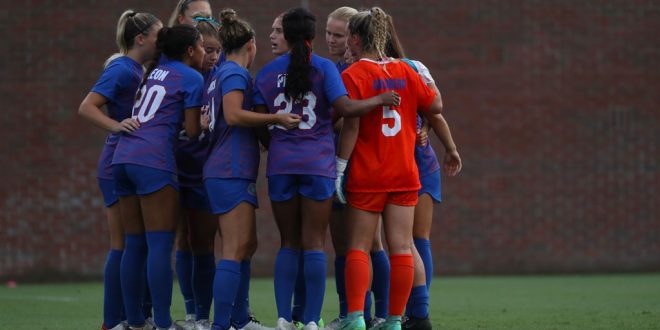 The Florida Gators soccer season comes to a close after a loss to Tennessee in the SEC quarterfinals at Orange Beach Sportsplex in Orange Beach, Alabama.

Tennessee beat the Florida Gators by the final score of 5-2. The Volunteers took the early lead over the Gators with two goals in the first 20 minutes.

Despite the effort of Head Coach Tony Amato’s squad, the Gators were unable to get ahead of the Volunteers for the duration of the game. This was the Gators’ fifth consecutive loss to the Volunteers.

The Florida Gators soccer team finished their season with a record of 4-12-4.  The Gators in-conference record this season is 3-6-1.

Overall, this was not the Gators’ best season. But following their overtime victory over the Vanderbilt Commodores, the Gators gained motivation heading into the SEC quarterfinals.

With a young team, the Gators will look to continue to grow as a team and look to have a better season next year.

The Tennessee Volunteers advance to the SEC Tournament semifinals following their victory over the Florida Gators. The Volunteers will face the winner of the Alabama-Ole Miss matchup at 7:30 p.m. on Thursday.