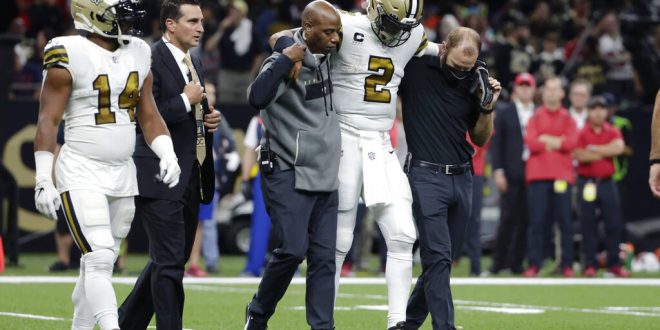 New Orleans Saints quarterback Jameis Winston (2) is helped off the field after being injured from a horse collar tackle in the first half of an NFL football game against the Tampa Bay Buccaneers in New Orleans, Sunday, Oct. 31, 2021. (AP Photo/Derick Hingle)

Coach Payton discussed with the media how he believes more injures occur when playing on artificial grass. Payton called the injury a “classic field-turf injury.”

Buccaneers linebacker Devin White was flagged for an illegal horse-collar tackle which resulted in Winston being out for the rest of the game. Quarterback Trevor Siemian replaced Winston on the field and helped lead the team to a victory. Siemian completed 16 of 29 passes for 159 yards and a touchdown. He assisted in two touchdowns and three field goals.

Payton told the media that he thought Siemian played well and adapted to the situation.

Payton said, “There were a number of plays where he’s got a free rusher and he gets the ball out on time. I thought he played with poise and made good decisions. It’s what you want someone to do that’s coming into the game really without a lot of work, and I thought he handled the situation well. The tape was good for him.”

Payton talks about Winston’s leadership and his past performance.

Winston is due to become a free agent in about five months. The injury makes the future of his career complicated. Due to this bump in the road, he will have to sign a one-year deal with a team. Winston is relying on a healthy and fast recovery to be able to sign a contract when he is a free agent.