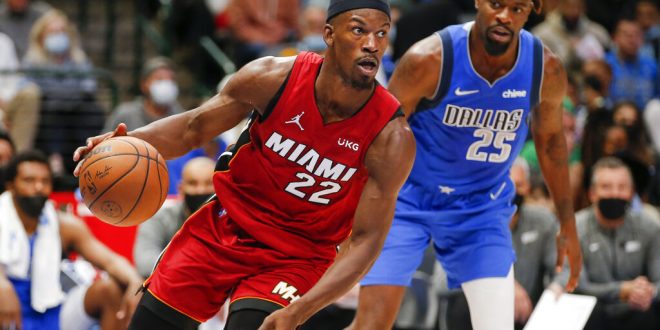 Mavericks feel the heat in loss to Miami.

The Miami Heat strolled into Dallas and came out with their fifth straight win with a dominant late rally performance Tuesday night. Miami defeated the Mavericks 125-110 with four players dropping 20+ points. The Heat’s win showed the team’s capability to maximize their offense and Tyler Herro’s impact on the team’s success.

This is the first time since the 2012-2013 season Miami has started 6-1. They set a franchise record Tuesday night as the 2nd longest streak to start a season with their sixth straight win by double digits.

For the first time in franchise history, four Heat players scored 22 or more points in a game. Tyler Herro lead the pack with 25 points off the bench, Jimmy Butler had 23 points and Bam Adebayo and Kyle Lowry both contributed 22 a piece. Miami’s points came from all over the court. The team finished with a field goal percentage of 51.8% , 86% at the free-throw line and 52% at the three.

The first quarter of the game however, Miami struggled offensively. Dallas went on a 13-3 run but the Heat were able to finally catchup, walking into the second down by six. From there Miami outscored Dallas in every quarter. The Heat had their highest scoring quarter of the season in the second when they dropped 46 to Dallas’ 32.

So far all season Tyler Herro has been proving himself to be one of the NBA’s best reserve players. Herro currently leads the league in bench points per game. He has now scored 157 points through seven games, the most by a reserve in league history.

Tyler giving y'all something to talk about

17 points in 18 minutes off the bench pic.twitter.com/2YacMH9yEZ

Herro’s off-season development has been on full display. Last season he averaged 15 points and was shooting at a 43% from the field. The guard is now averaging 22.4 points per game and shooting over 47 percent from the field. The two year vet has also dropped over 20 points in five of seven games and 25 or more in four of them.

Miami currently stands at the top of the Eastern Conference. They are tied with Chicago with a record of 6-1. The team returns to the court Thursday at home against Boston.

Previous Oregon moves into playoff spot after debuting No.4 in CFP ranking
Next Henry Ruggs III released by Raiders, charged with DUI