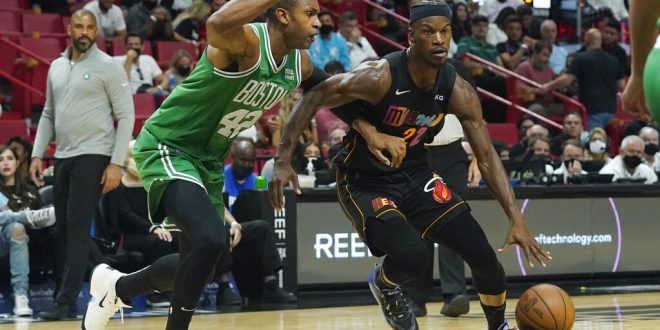 The Miami Heat just couldn’t get their offense on track in a brutal loss to the Boston Celtics at home. The Heat lost by a score of 95-78 in a game where they couldn’t buy a bucket.

The team was on a five-game win streak where they were able to crack 100 points each time. Thursday, their 78 points was not only their lowest total of the season, but it was their worst score since 2016.

The good news, Miami wasn’t all bad despite what the final score might indicate. The Heat started the game on top winning the first quarter 24-18.

After falling behind by 20, they even went on a 14-2 run to get the lead down to eight points in the third quarter. However, they couldn’t put it all together as the Celtics pulled away to hold on to the win.

Despite the dismal offensive performance, the team still had a solid defensive outing. Celtics’ star forward Jayson Tatum only managed 10 points on 3/13 shooting from the field. The Celtics leading scorer was Jaylen Brown who ended with only 17 points, 8 below his season average.

They held the opposing team to less than 100 points for the fifth time in their eight games this season. Their defense, which is allowing a league-best 98.4 points per game, showed what it’s capable of, even on an off night for the team.

This building is ALIVE pic.twitter.com/tBfpkMtXqD

The Heat simply couldn’t score. Their lowest point total of the season was previously their 91-point effort against the Celtics. They had been averaging 110.9 points per game, so Thursday’s score of 78 was disappointing.

As a team, Miami struggled mightily from the field. The team was 28/81 from the field and could only knock down nine of their 41 three-point attempts.

Star player Jimmy Butler was able to notch 20 points, and shooter Duncan Robinson contributed 16, but neither could do so efficiently. Butler made eight of his 18 attempts and Robinson was 5/17 taking all of his shots from behind the arc.

Sixth Man of the Year favorite Tyler Herro only managed 6 points, well below his season average going into the game of 22.4. The Heat will need him to get back on track if they want to get back in the win column.

Perhaps worst of all, starting point guard Kyle Lowry was taken out of the game after spraining his ankle as the third quarter was coming to a close. Robinson was trying to draw a charge and when he got knocked over, he slid into Lowry’s leg. He wasn’t able to put any pressure on it as he hopped to the locker room.

The Heat’s next matchup will come against the 7-1 Jazz. The game will be at at 7:30 on Saturday in Utah.

There is currently no word if Lowry will be able to play. If Lowry misses some time, Herro will likely have to take over and see expanded minutes. If he plays well, the team can build upon their 6-2 record.