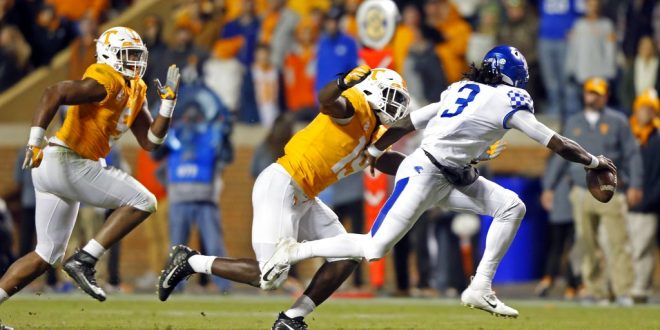 As college football enters November, the national landscape is taking shape as the final four games loom ahead. Despite the SEC East having been clinched by Georgia last week, important games in the East still lie ahead. Tennessee vs Kentucky is one of those marquee games.

Tennessee has dominated the series all-time, having an 81-26 lead in the series. That dominance is not a relic of the past either. Kentucky has only beaten Tennessee three times since 1984, including a 26-year losing streak to the Vols.

However, the Mark Stoops era at Kentucky coupled with the struggles of Tennessee football over the last decade have made the rivalry more interesting in recent seasons. Kentucky has won two of the last four games, including last year’s 34-7 win in Knoxville. That was Kentucky’s first win in Knoxville since 1984 and their largest win over the Vols since 1935.

Despite the fact the schools no longer play for the beer barrel, the rivalry between the two is still very much alive. In this year’s matchup, top-25 and bowl implications are on the table as well.

The Vols come into this game with a 4-4 record and sit third in the SEC East. Tennessee has played sound football against weaker opposition. Back in early October, they handily defeated Mizzou 62-24 and South Carolina 45-20.

Despite winning those games without much trouble, Tennessee has struggled against tougher opposition. They lost close games to Pitt and Ole Miss and were blown out by Florida and Alabama. This game against Kentucky gives Tennessee the chance to prove they can beat a quality team. A win here will also give the Vols a very high chance of making a bowl game this season.

Kentucky has had one of the best season’s in their program’s recent memory. A 6-0 start to the season with wins over Florida and LSU is impressive for any school. But for Kentucky fans, it is a scenario that could have only been a dream until this season. As great as the Wildcats’ 2018 season was, 2021 has the potential to be even better. Including their bowl game, winning out would mean an 11-win season for Kentucky for the first time since 1950, when Bear Bryant was head coach, and only the second time in program history.

Looking at Kentucky’s remaining schedule, Tennessee might just be their toughest remaining opponent, pending the bowl matchup. The games against Vanderbilt and New Mexico State should be no problem. Then they end with their annual matchup with Louisville, which on the road has the potential for some issues, but Kentucky should for sure be considered the favorite in that game.

After losing to Mississippi State last week, a win over Tennessee will put Kentucky back on track. Finishing the season with a strong 10-2 record has a shot of putting Kentucky in a New Year’s Six bowl for the first time in the 2000s.

On the offensive side of the ball, it is advantage Tennessee. The Vols outgain the Wildcats by almost 90 yards per game and have scored on average 10 more points per game than Kentucky.

Tennessee’s main strength on offense comes from their rushing attack, which ranks fourth in the SEC. Their leading rusher on the season is Tiyon Evans with 516 yards, averaging 6.6 per carry. Evans has also rushed for six touchdowns in 2021, with three of them coming against Mizzou. Their rushing attack is supported by quarterback Hendon Hooker, who 416 yards and four touchdowns on the ground this season.

Kentucky’s offense has really stalled for them. Even with Penn State transfer Will Levis, the Wildcats are third worst in the SEC in yards per game and points per game. Throwing only 191 passing yards per game has not gotten them far on offense. The rushing game fairs a little better. Averaging 175.3 rush yards per game is good enough for 8th in the SEC.

Kentucky’s main playmakers on offense are runningback Chris Rodriguez Jr. and wide receiver Wan’Dale Robinson. Rodriguez has 809 rush yards on the season, more than half of the entire team’s. He is second in the SEC in rushing yards and 18th in the country. Robinson is by far the Wildcats’ most prolific receiver. He has totaled 645 receiving yards on the season and has five receiving touchdowns, the only Kentucky receiver with more than two. There big weakness has been turnovers. Nine interceptions and seven lost fumbles are drive killers. Their turnover margin of -12 ranks dead last in all of FBS.

Defense is advantage Kentucky. The Kentucky is defense is largely the reason the team has been so successful this year. Allowing 335.5 yards per game is good enough for sixth in the SEC and 20.8 points allowed per game is fifth best. Defensively the team is led by senior linebacker DeAndre Square with 62 total tackles and by sophomore linebacker J.J. Weaver with four sacks on the season.

Tennessee’s defense averages 393.8 yards allowed per game, ranking 10th in the SEC. They allow 26.5 points per game, ninth in the SEC. The Tennessee defense is in that gray area between not horrible but not particularly good either. What they have accomplished though is forcing 11 turnovers on the season. Going up against a turnover-prone Kentucky team, this could be Tennessee’s way of hurting Kentucky.

The game should be expected to be a low-scoring affair. Kentucky’s stout defense holding Tennessee while the Kentucky offense struggles apart from a few big plays. Tennessee is listed as a one-point favorite. Kickoff is set for 7 p.m. EST at Kroger Field in Lexington, KY. Live coverage can be found on ESPN2 and ESPN Radio.

Jack Shivertaker is a senior at the University of Florida pursuing a degree in Journalism with a focus on sports media.
@JackShivertaker
Previous Heat Can’t Catch Fire Against the Celtics
Next CFB: Auburn at Texas A&M Preview