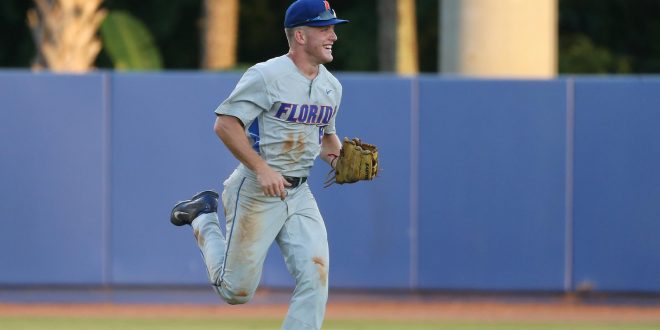 St. Louis Cardinals center fielder Harrison Bader won his first career Gold Glove Award Sunday. Bader played at UF from 2013 to 2015 before the Cardinals drafted him in the third round of the 2015 MLB Draft. He led the Gators to the 2015 College World Series semifinal en route to earning all-tournament team honors. In his final college season, Bader committed zero errors across 134 defensive chances for a perfect fielding percentage.

In 2021, Bader led the all National League center fielders in outs above average (14) and defensive runs saved (15). He recorded a .990 fielding clip across nearly 900 innings. In 296 defensive opportunities, Bader made only three errors. He tallied four assists including this laser to home plate against the Pirates.

Harrison Bader fired this ball home 91.2 mph to keep this Cardinals lead at 1. That's his third-fastest tracked throw of the season. After the overturned replay, this one just seemed destined to falter. And then it didn't.

Of his 289 put outs in 2021, Bader’s most impressive is arguably this diving catch against against the Chicago Cubs.

Career Year At the Plate

The outfield wasn’t the only place Bader succeeded in the 2021 season. The Bronxville, N.Y., native produced a career year at the plate. Bader slashed .267/.324/.460 — career-bests in batting average and slugging percentage. He hit a career-high 16 home runs, 21 doubles and drove in 50 runs. After striking out 242 times combined between 2018 and 2019, Bader struck out just 85 times across 401 plate appearances for a career-low 21.2% strikeout rate.

Hello, I am currently a junior at UF studying sports media journalism with a concentration in Political Science. I contribute web and radio content weekly for WRUF ESPN Gainesville. Be sure to check out some of my recent articles!
Previous Pat Dooley’s ‘Back 9’ Nov 8th
Next Around the NFL: Week 9