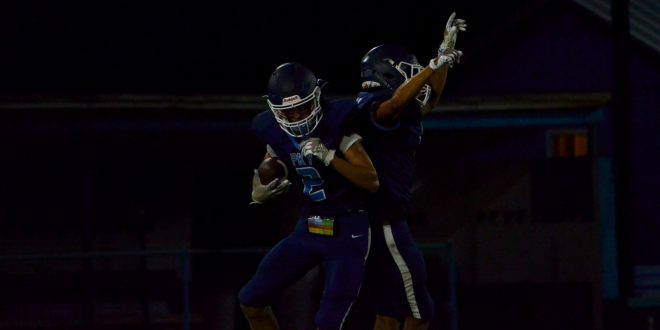 The No. 4 P.K. Yonge Blue Waves travels to Ocala on Friday to play the No. 1 Trinity Catholic Celtics in the 3A regional semifinals.

Last week, P.K. Yonge defeated No. 5 Crescent City 56-7 in the regional quarterfinals at home.  Although coming into the game it looked like a pretty even matchup, the Blue Waves were able to completely dominate the game.

Within the first 15 seconds, the Blue Waves put numbers on the scoreboard.  After the Raiders’ opening kick was left around the 15 yard line, Junior Jaren Hamilton made an 85-yard return to the end zone. Coach Kevin Doelling said that that first play made by Hamilton was the key play of the game, and it kept them competitive.

With a suffocating defensive line and an explosive offense, the Blue Waves were able to end the first half with 42 points while the Raiders struggled to answer.  Touchdowns from Rashuan Walden, Kendrick Wooden Jr., Cameron Pedro and AJ Small all contributed to their final 56 points.

This win against advanced P.K. Yonge’s record to 8-3 and added a win to their prior six-game winning streak making it seven.

Coach Doelling said that their success this season has had an impact on the rest of the student body.

He says that it’s rewarding to see the school respond this way and enjoy watching P.K. Yonge football again.

The Trinity Catholic Celtics are no stranger to the Blue Waves.  At the 2021 preseason Kickoff Classic, they actually played a quarter against each other where the Blue Waves won 8-6.  However, Doelling emphasizes that the Celtics they are about to take on are far different from the Celtics they saw in August.

Similarly, the Blue Waves aren’t the same team they were then.  When they played the Celtics, they had just began implementing a new playbook.  Coach Doelling says that the team has built chemistry and consistency since then, and he’s looking forward to seeing how they match up now.

The Celtics have a 6-2 record.  They started off their season slow with two losses against Clearwater Central Catholic and Gainesville High School.  However, the Celtics were able to put those losses behind them and went on to finishing their regular season with a six-game winning streak.  Coming off of a bye week, the Celtic’s are ready to continue their winning streak and advance to the regional finals.

With both teams looking to continue their winning streaks and advance farther into the finals, who will overpower who?  The matchup is at Trinity Catholic on Friday at 7:30.

Jolie Katzen is a third-year Journalism major with a focus on sports media at the University of Florida.
Previous Hawthorne Prepares for Playoffs
Next UF Volleyball Sweeps Auburn; “Most Fun Match of the Year” 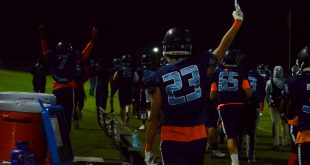 P.K. YONGE CAPS OFF THE REGULAR SEASON WITH A FRIDAY NIGHT WIN