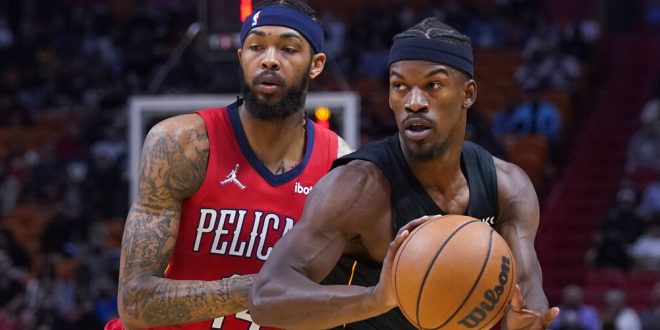 Miami Heat forward Jimmy Butler, right, prepares to pass as he is guarded by New Orleans Pelicans forward Brandon Ingram during the first half of an NBA basketball game Wednesday, Nov. 17, 2021, in Miami. (AP Photo/Wilfredo Lee)

Jimmy Butler is back. With his return, the Miami Heat are also back in form. Last week, the Heat fell to 7-5 as they dropped the first three games of a 5-game road stretch against the Western Conference. They finished it off with 2 wins, and last night’s 113-98 home victory over the New Orleans Pelicans makes it 3 straight wins for the Heat. Miami now ranks 4th in the Eastern Conference standings with a 10-5 record on the season.

Butler was back in the lineup after having missed 3 games and he made his presence felt. He led the Heat to the win, scoring a game-high 31 points, and added 10 rebounds and 10 assists to complete a triple-double. In doing so, Jimmy Butler made some franchise history, tying LeBron James as the Heat’s leader for most 30-point triple-doubles.

Jimmy Butler recorded his 4th career 30-point triple-double, all of which have come with the @MiamiHEAT.

That ties LeBron James for the most in franchise history (regular season & playoffs). pic.twitter.com/v8wHyci7bS

Miami may have had its home crowd worried, as they went down by 15 points twice in the first half. The Heat overcame a halftime deficit, however, and outscored the Pelicans 68-46 in the second half. The Pelicans are floundering at 2-14, with their star Zion Williamson still out.

Speaking to the media, Butler stated the game didn’t start off well, saying “I think we thought this was going to be handed to us. But we corrected it.” After a 16-5 run to end the 3rd quarter, the Heat didn’t look back and closed out the game in the 4th.

Even though Bam Adebayo and Kyle Lowry remained out, having Butler back in the lineup boosted Miami’s performance. Five players joined Butler in double-digit scoring, including Gabe Vincent, Max Strus, and Caleb Martin off the bench.

Tyler Herro added 19 points as he remained in the starting lineup a bit longer with Lowry still out. He did not shoot particularly well, making only 7 of 19 attempts, but did covert on an unintentional 3-pointer that was a great spark of energy for the team.

The Heat’s attention now turns to the Washington Wizards. Miami plays host to Washington, as part of their first home back-to-back set of the season.

Although Washington is coming off a 97-87 loss to the Charlotte Hornets last night, the 10-4 Wizards sit at the top of the Eastern Conference.

Bradley Beal is off to an impressive start to the season, averaging 23.4 points, 5.3 rebounds, and 5.7 assists so far. The former Gator remains the Wizards’ star player but Washington’s offseason additions—particularly Spencer Dinwiddie, Montrezl Harrell, and Kyle Kuzma—have helped propel the team to the top of the East.

The Miami-Washington matchup will tipoff at FTX Arena at 7:30 p.m.