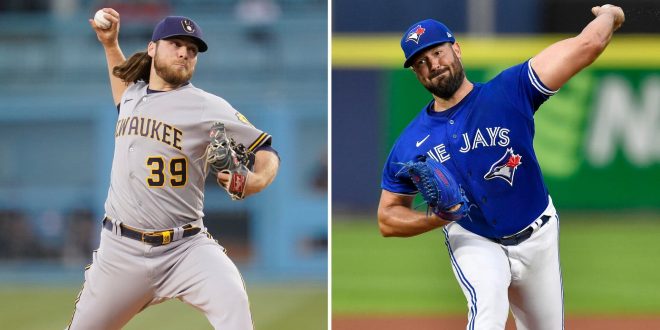 Milwaukee Brewers ace Corbin Burnes won the National League Cy Young Award, and Toronto Blue Jays starter Robbie Ray took home the American League Cy Young Award. The award is voted on by members of the Baseball Writers’ Association of America, and given to the best pitchers in Major League Baseball. Both Burnes and Ray had a career-year after hitting low points the year before.

Burnes, 27, is just the third Brewers pitcher to win the award.

In 2019, Burnes was primarily a relief pitcher who posted an 8.82 ERA in 32 appearances. He started the season strong, striking out 58 batters before allowing a single walk. By the end of the 2021 season, the right-hander recorded an MLB-best 2.43 ERA accompanied by 234 strikeouts and a 0.94 WHIP.

The key to Burnes’ success was getting rid of a four-seam fastball that wasn’t working and focusing more on the 95 mph cutter. “I had to find something I could get strikes with and get ahead in the count,” Burnes said. “Initially it started as trying to throw a hard slider for a strike. But the more I threw it and the harder I threw it, it morphed into the cutter you’re now seeing.”

Robbie Ray is the fifth Blue Jay to win the Cy Young award, and the first to do it since late Hall of Famer Roy Halladay won it in 2003.

Just last year, the left-hander posted a 6.62 ERA, with the highest rate of walks per nine innings of any pitcher with at least 50 innings. This season, Ray shrunk his walk rate from 7.8 per nine innings to just 2.4.

“It’s perseverance,” said Ray, “being able to push through those adversities.”

Ray did more than just reduce the number of batters he walked. He struck them out. Ray recorded 248 Ks, the most of any pitcher in Major League Baseball. He also topped the AL with a 2.84 ERA and 1.045 WHIP in 193 1/3 innings during 32 starts.

Ray’s dominance was unquestionable, as he received 29 first-place votes on the AL ballot—just one vote shy of a unanimous decision. The 30-year-old now heads into free agency, but he assured fans that Toronto is not out of the conversation. “Obviously, I love Toronto,” Ray said. “But we’ll see where things go.”

Both Burnes and Ray showed resilience in their come-back seasons, proving that a bad year isn’t career-ending. “Baseball is always evolving,” Burnes said. “As a baseball player, you have to evolve with the game.”

Previous UF Volleyball Sweeps Auburn; “Most Fun Match of the Year”
Next Jimmy Butler Has Miami Heating Up