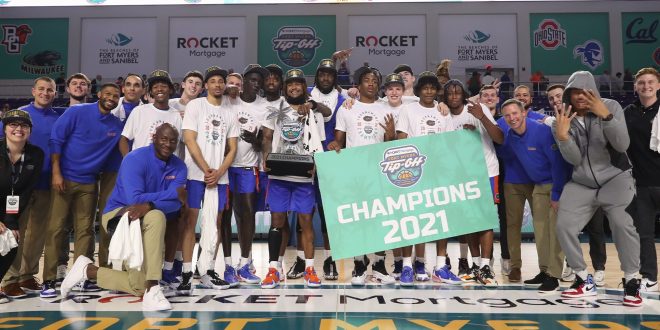 Florida started action in the tournament Monday taking on California Golden Bears and the Florida offense was too much for the Bears as they beat the Bears 80-60.

As the Gators coasted their way to the championship game they found themselves matched up against Ohio State. Florida started off slowly, trailing the Buckeyes in the first half. Numerous lead changes took place throughout the game for the Gators and Buckeyes , but Florida could not find a way to stop Ohio State in the first half as they shot 53 percent from the field. Florida trailed going into the second half 30-26.

Second Half Turn Around

In the second half, Florida trailed Ohio State by as many as 10 points but the Gators would rally.  Florida fought back to tie the game at 65-65 with 2:57 left. The Gators finally found their first lead of the game at the 2:11 mark, 66-65 as Colin Castleton hits one of two free throws to put Florida ahead.

Ohio State answered back and led by two points but Gator guard Tyree Appleby found Anthony Duruji in the air for big time lob to tie the game at 68-68.

Then, with the clock winding down, Tyree Appleby hit a shot from 30 feet at the buzzer to give the Gators the win 71-68.

Phlandrous Fleming Jr. had a big game off the bench for the Gators with 19 points, eight of them coming in the first half. Forward Colin Castleton had another double-double night adding 11 points and 13 rebounds, his fourth double-double of the young season.

Florida Guard Tyree Appleby had this to say about his buzzer beater.:

“It felt good, just seeing one go in. My teammates kept pushing me during the game saying, ‘Next shot, next shot will go in.’ They always kept me confident throughout the whole game.”

Florida previously won the 2019 Charleston Classic championship and this tournament title gives the Gators their second back to back tournament titles in school history.  The last time the Gators did that was in 1976 at the Gator Bowl Tournament and 1977 in the Vermont Classic.

Ohio State entered this match up after taking down Seton Hall 79-76. E.J. Liddell led the Buckeyes for  this match up against Florida, scoring 23 points with five rebounds while forward Kyle Young added 11 points and six rebounds.

Florida returns home in the O’Connell Center Sunday where they host Troy University for a 12 p.m. tip off.