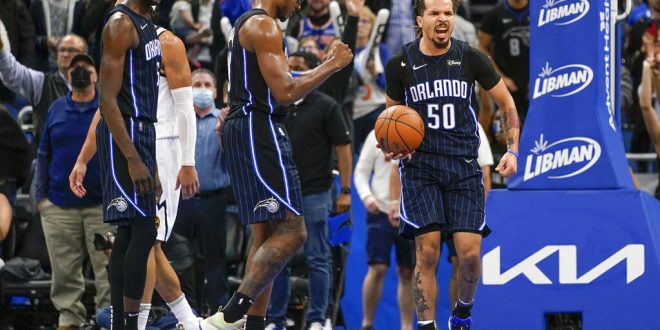 The Orlando Magic beat the Denver Nuggets 108-103. The win snapped a seven-game losing streak for the Magic.

Orlando had to work for this one. The Magic trailed by 14 points after the first quarter.  Denver led by 16 points at halftime. However, the Magic seemed to settle in after a slow start.

Orlando outscored Denver in the second half by 21 points. The Magic took their first lead of the game with just under two minutes left when rookie Franz Wagner hit a three.

The forward would finish with 15 points and five assists.

Orlando clung to a three-point lead as the teams traded missed shots over the final 90 seconds. Cole Anthony would ice the game after sinking two free throws with 2.3 seconds left.

Anthony missed the previous six games with a sprained ankle. Yet, the second-year guard did not seem to miss a beat. He led the team in scoring with 24 points to go along with eight rebounds and seven assists. Anthony said it felt good to be back on the court with his teammates.

Outside of Anthony’s big return, five other players were able to score in the double-digits.

The young team shot well hitting 54.3% of its shots.

While the team struggled from behind the arc (just 6-for-27), Orlando won the rebound battle. Center Mo Bamba was able to grab his 1,000th career rebound in the win.

Former Magic Forward Aaron Gordon made his first return to Orlando after being traded to Denver late last season. Gordon made his presence felt right away as he scored the first bucket of the game. He finished with 17 points and eight rebounds including this poster over former teammate Chuma Okeke:

Jeff Green also returned to Orlando in this game. He finished with nine points and three rebounds.

The Magic will travel to Houston to play the Rockets on Friday at 8 p.m. The Rockets have won four straight games.

Trey is a third year sports media major at the University of Florida, and a WRUF reporter.
@@treyboogie5
Previous Cowboys, Saints Look to Snap Struggles
Next CFP Board to continue expansion Talks