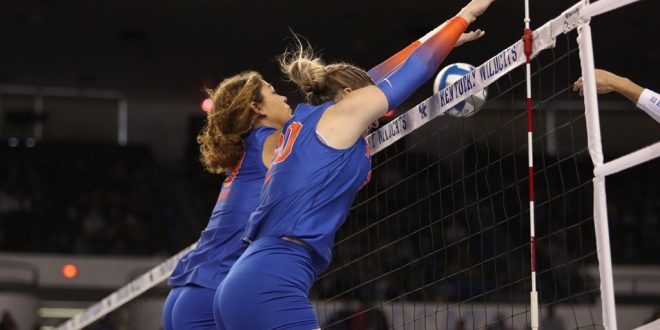 Last night, the No. 16 seeded Florida Gators defeated Florida A&M in the first round of the NCAA tournament. The win gives Head Coach Mary Wise her 1000th win as a head coach. The Gators will continue play in their 31st consecutive tournament appearance with tonight’s game against Miami for the second round.

The Miami Hurricanes advanced past the first round after defeating South Alabama yesterday in four sets. The 24th ranked Hurricanes put up impressive offensive stats in order to grab the win.  OH Angela Grieve led the way with 19 kills for a .300% hitting percentage. Then, freshman OH Peyman Yardimci notched 13 kills and MB Janice Leao also made double-digits with 12 kills.

Miami will bring all of their weapons to the court tonight against Florida. Looking back at the regular season and mutual opponents, the Hurricanes were able to defeat Florida State in five sets. Meanwhile, the Seminoles went down as a loss within the Gators record book.

Florida also poses big threats on the court. As a team, Florida ranks second place in hitting percentage at .296. One of the biggest contributors to that stat is Lauren Fort who is ranked fifth overall in the NCAA with a .463 hitting percentage. Last night, setter Marlie Monserez dished out 38 assists to her offense and she plans to bring that same energy to tonight’s match.

“We got to watch them play a little bit. We’re really excited,” said Monserez.

The second-round matchup brings a different type of pressure and energy as both teams are coming off of wins. Coach Wise explained that she expects Miami to come to the court prepared.

After South Alabama, in its first NCAA tournament match, went up 1-0 on @CanesVB, Miami responded by winning the next three to advance to the 2nd Round.#NCAAVB pic.twitter.com/KsnLQ0lde9

Parker Welch is a Senior at the University of Florida majoring in Sports Media at the College of Journalism & Communications.
@parkerrwelch
Previous Georgia, Alabama meet in SEC Championship
Next Pittsburgh and Wake Forest Set For ACC Championship Game