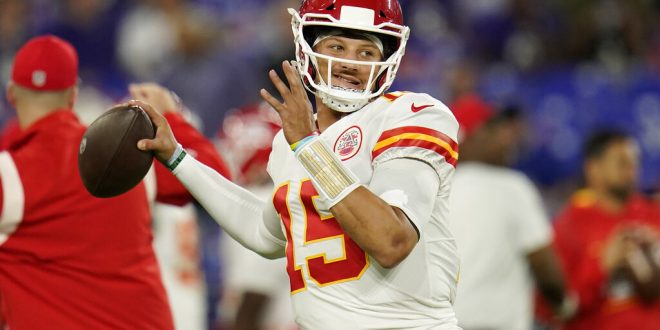 It’s the home stretch in this newly-expanded NFL season.

While some division races, like the NFC South, are almost done with, others remain tight.

The Raiders look for some pay for a blow-out loss at home in Week 12, when they face the Chiefs.

After a slow start, Kansas City has somewhat returned to form, winning six of their last seven. Quarterback Patrick Mahomes hasn’t fully returned to form, but the Raiders have already been given a taste of the young QB we have come to know.

In the previous matchup, Mahomes torched the Raiders’ defense, throwing for 406 yards and five touchdowns. They’ll have to tighten up to stand a chance.

Las Vegas stands at 6-6 on the year, two games behind Kansas City.

First and last place is separated by two games. This also happens to be the week that the first-place Ravens take on the last-place Cleveland Browns.

With a Steelers loss on Thursday, the Browns have a chance to leapfrog from intradivision opponents. They have to win just to leapfrog anybody, but a Bengals loss, plus the win, would catapult them to second place, and one game behind Baltimore.

The Ravens won the low-scoring bout two weeks ago. Browns quarterback Baker Mayfield looks to take a step forward in his average season. His last game against the Ravens about matches how he’s looked against them over the last few seasons. He threw a touchdown and no picks and 247 passing yards.

Harrison is a sports coordinator at ESPN 98.1 FM/850 AM WRUF. He served as a beat writer for Florida Gators football for the 2019 and 2020 seasons. He also contributes to WRUF's Gainesville Sports Center segments and makes appearances on the Clash on Harp on Sports. Harrison has been a content writer for WRUF since January 2019 as well.
@HarrisonSmaj
Previous Star Point Guard Leads Santa Fe into Promising Season
Next Saint Francis Wolves loses 49-30 to the HEART Falcons in the Wolfden