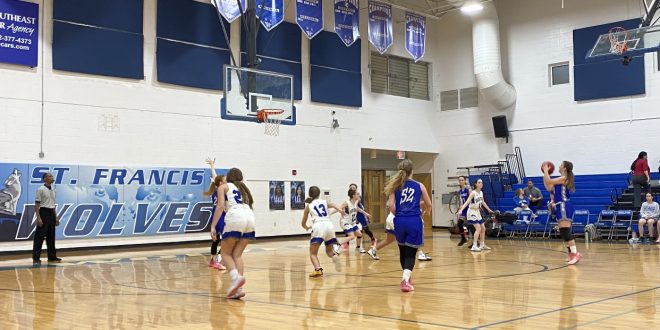 The Saint Francis Wolves (2-5) hosted the HEART Falcons (10-3) on Friday evening in the Wolfden. In this matchup, the Wolves looked to add another win to their record and hopefully start a streak of wins. However, the Falcons ended up coming out with a 49-30 win over the Wolves.

As the teams, stepped onto the court the energy in the gymnasium started to rise. The student section already on their feet started chants for the girls as they announced the starting lineup. The starting lineup for the Wolves was sophomore Lexi Bhatia, senior Avery Hasko, sophomore Natalia Winans, senior Isabella Scarpatti and senior Mallory Jablonski.

The Wolves won the tipoff, but the Falcons intercepted the pass, made a fast break towards the net and scored. For the first couple of minutes of the game, the score was tied and Bhatia broke the tie by making one out of two foul shots, 5-4. This was the only time during the game that the Wolves held the lead.

Passing and running plays seamlessly aided the Falcons throughout the game. The ball never stopped moving and they always knew where they needed to be and how to press the Wolves to where they could not execute any of their plays. The Wolves struggled to make passes without the Falcons stealing, talking and shooting.

At the end of the first quarter, the Wolves trailed by eight points, 12-4.

Coming out from the timeout, the Wolves did whatever they could to score some points. Bhatia scored her first three-point field goal of the game.

The Falcons kept fouling the Wolves and allowed Jablonski and Scarpatti to score one out of two of their foul shots and Bhatia scored two of her foul shots, 15-11.

It was not long until the Falcons got back into their groove and racked up some more points before the half ended. When the buzzer ran out, the Falcons held a 21-11 lead.

First Half Mistakes in the Third Quarter

Head Coach Scott McDaniel worked from the sidelines to get his team into position, so they could pull off some of their plays. Anytime the point guard had possession of the ball it was passed to Bhatia and if she had the chance she would try to go for a three. At one point, Bhatia shot the ball, it bounced off the backboard, Jablonski caught the rebound and scored the first basket of the half, 21-13.

Again in this half, the Wolves did not execute plays that helped them score if anything they benefitted the Falcons more because they easily intercepted each of their passes. Multiple times the Wolves were close to scoring, but they traveled and had to turn over the ball.

Switching players in and out helped the Wolves get a bit of momentum. McDaniel substituted Ari Russell in and with an assist from Allyson Romero, Russell scored from inside the paint, 27-15.

Tensions High in the Fourth Quarter

Even though the Falcons held a good lead, the game got a little more intense and aggressive. The players fouled each other left and right. On the way down from a layup, a Falcons’ player pushed Scarpatti and said or did something unsportsmanlike and got a technical foul called on her.

Bhatia took the foul shots for the Wolves and made both shots.

As the clock wound down, the Wolves did not let that stop them from trying to make the gap in the score smaller.

Avery Hasko scored her first basket of the night, 42-21. Right after Bhatia scored another three.

The team pushed themselves all the way until the very last second and ended the game, 49-30.

Molly is a fourth-year journalism major specializing in sports and media and working on a certificate in sports management at the University of Florida.
@_mollycooper
Previous NFL Week 14 Preview: Some Division Races Remain Tight
Next Gators Look For Third Straight Win, Host FSU