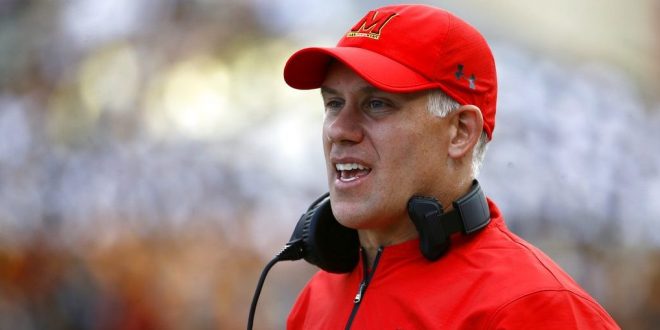 FILE - In this Saturday, Sept. 9, 2017, file photo, Maryland head coach DJ Durkin stands on the sideline during an NCAA college football game against Towson in College Park, Md. The University System of Maryland's board of regents announced Tuesday their recommendation that Durkin retain his job. Durkin has been on paid administrative leave since August, following the death of a player who collapsed during practice and an investigation of bullying by the Maryland coaching staff. (AP Photo/Patrick Semansky, File)

Meanwhile, Durkin helped lead the Rebels to a top-10 ranking as well as a Sugar Bowl appearance. Prior to that, Ole Miss was the worst defensive team in the SEC. The Rebels were allowing a league-worst 519 yards per game and 38.3 points per game.

Durkin would pull an impressive turnaround for the Rebels as the defense elevated Ole Miss to winning 10 regular season games for the first time in program history. The Rebels ranked eighth in the conference in scoring defense allowing an average of 24.7 points per game.

Durkin began his coaching career in 2001 when he joined Bowling Green new head coach Urban Meyer’s staff. He reunited with Meyer when he joined the Florida coaching staff in 2010 and remained on the staff when Will Muschamp took over as head coach.

Durkin started his career in Gainesville as a linebacker coach and special teams coordinator. In addition, he established a reputation as a strong national recruiter. As an assistant, Durkin helped the Gators land four straight top-recruiting classes. As a result, Rivals.com named Durkin the 2012 Recruiter of the Year.

In 2014, he was named Florida’s interim head coach for the Gators’ bowl game after Muschamp announced he would step down following the regular season. Durkin led Florida to a 28-20 victory over East Carolina in the 2015 Birmingham Bowl.

Tori Edwards is a fourth-year Telecommunications student specializing in News with an outside concentration in Sport Management at the University of Florida. Tori works as an author and reporter for WRUF.com and is the voice of trendings on Wednesday mornings on ESPN 98.1 FM - 850 AM WRUF. You can reach Tori at victoriaedwards@ufl.edu.
@ToriEdwardsNews
Previous Jaguars’ End To A Rough Season
Next Big Ben Set For Potential Final Game of NFL Career Against Baltimore Ravens