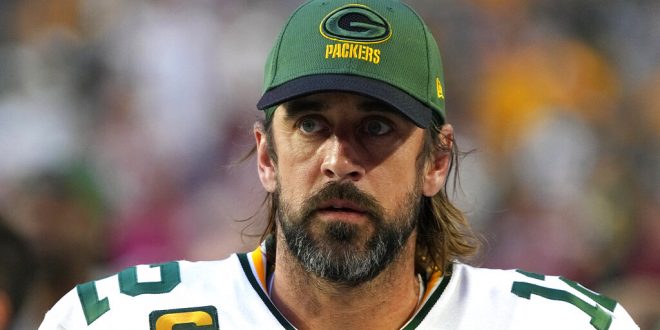 Green Bay Packers quarterback Aaron Rodgers (12) is shown during the first half of an NFL football game against the Arizona Cardinals, Thursday, Oct. 28, 2021, in Glendale, Ariz. Packers quarterback Aaron Rodgers is in the NFL’s COVID-19 protocol and will miss Sunday’s game at Kansas City. Green Bay coach Matt LaFleur confirmed Wednesday, Nov. 3, 2021, that Rodgers was in the protocol, but would not say if Rodgers had tested positive nor if the reigning NFL MVP has been vaccinated. (AP Photo/Rick Scuteri)

As the final week of the 2021-2022 NFL season comes to a close, playoffs are right around the corner. Officially, playoffs are set to begin on Saturday, January 15, with two wild card games.

An additional two teams will clinch playoff berths in the AFC. Among these potential teams are the Baltimore Ravens, Indianapolis Colts, Pittsburgh Steelers, Los Angeles Chargers and the Las Vegas Raiders.

The Baltimore Ravens secure a playoff spot with a win against Pittsburgh on Sunday, a Chargers loss, Colts loss and a Dolphins loss or tie.

The Pittsburgh Steelers can clinch a playoff berth with a win against Baltimore on Sunday, a Colts loss and if the Raiders and Chargers game doesn’t end in a tie.

The Los Angeles Chargers have an opportunity to secure a playoff spot with a win or tie against the Raiders on Sunday.

Finally, Las Vegas is able to clinch a playoff spot with a win against the Chargers on Sunday. Also, if the Raiders tie and the Colts lose or the Colts lose and Pittsburgh sustains a loss or ties. Raiders’ interim head coach Richard Bisaccia said he is looking to improve their game ahead of this weekend’s matchup.

The Packers, along with the NFC North division title, have secured the No.1 seed, first-round bye and home field advantage.

With these six teams clinching, either the New Orleans Saints or the San Francisco 49ers have an opportunity to secure a playoff berth.

New Orleans plays the Atlanta Falcons Sunday. The Saints can clinch a playoff berth with a win against the Falcons and a 49ers loss.

Also in the NFC, San Francisco plays the Los Angeles Rams on Sunday. The 49ers can secure a playoff spot with or tie against the Rams or a Saints loss or tie.

As Week 18 comes to a close, multiple teams still have a chance to clinch a playoff spot. Also, among the teams that have already cliched, there are various competitions for the AFC’s No. 1 seed, the AFC East division title and the NFC West division title.