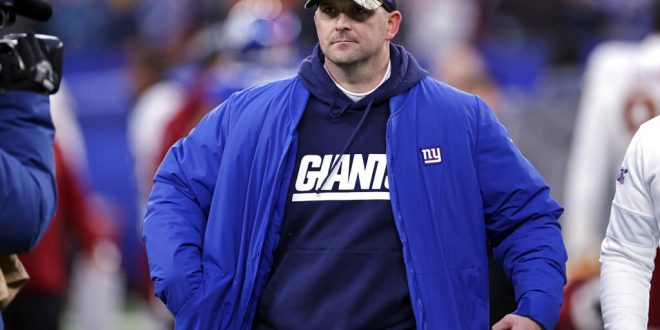 The news has spread. Joe Judge is out today. Who want’s to be a part of it? New York has a Giant hole to fill.

On Tuesday, the New York Giants relieved Judge from his head coaching position after two seasons. The Giants won just four games this season and lost their last six. Judge finished with a record of 10-23.

New York finds themselves looking for their fourth head coach since 2015. The last coach to last more than two seasons was Tom Coughlin, who won two Super Bowls in his 11 years.

The Giants would like to get back to the Super Bowl sometime soon. So, who will be the next coach to wake up in the city that never sleeps?

Giants defensive coordinator Patrick Graham has expressed interest in being a head coach some day. His time could be now.

He started as a coaching assistant with the New England Patriots in 2009. Graham has worked his way up through the ranks on the defensive side over the last 13 years. He’s worked for the Patriots, Green Bay Packers and Miami Dolphins. This is his second stint as a member of the Giants coaching staff.

His players love him. Second-year safety Xavier McKinney told The Record that Graham played a big role in his development.

Graham could become the first Black coach in Giants history.

Former Miami Dolphins head coach Brian Flores could be headed to New York. Flores went 24-25 in three seasons with Miami. His firing came as a surprise to many across the league. The Dolphins were 9-8 this year winning eight of their last nine games. The team was eliminated from playoff contention in Week 17.

Tampa Bay Buccaneers defensive coordinator Todd Bowles also could be headed back to New York. Bowles coached the Jets from 2015 to 2018. Since leaving New York, he helped the Buccaneers dominate the Kansas City Chiefs in the Super Bowl last season.

Buccaneers offensive coordinator Byron Leftwich is also an option. While Leftwich has never been a head coach, many around the NFL believe he is ready.

Flores, Bowles and Leftwich could all become the first Black Giants head coach.

Patriots offensive coordinator Josh McDaniels may get a second chance to lead a team. McDaniels previously coached the Denver Broncos, where he led for less than two years.

Other names include former Philadelphia Eagles coach Doug Pederson, Buffalo Bills offensive coordinator Brian Daboll and Michigan head coach Jim Harbaugh. All have been on a coaching staff that went to the Super Bowl. Pederson and Daboll have won it.

The Giants have a lot to consider before they make their final decision. A plethora of coaches are available.

It will be interesting who the Giants ask to make:

Trey is a third year sports media major at the University of Florida, and a WRUF reporter.
@@treyboogie5
Previous After Eight Years with Mike Zimmer, Vikings Search for New Head Coach
Next The Denver Broncos seeking New Head Coach