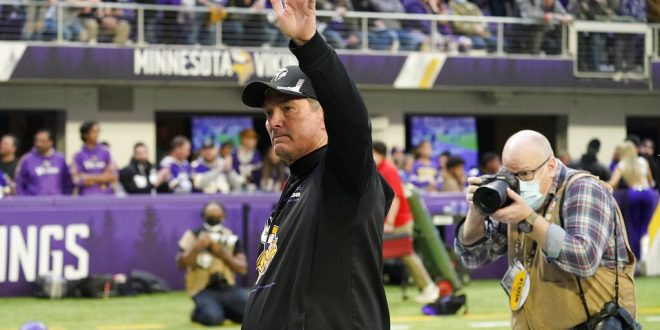 The Minnesota Vikings are one of seven teams in the NFL searching for a new head coach. After coaching eight seasons in Minnesota, Mike Zimmer was fired Monday after a disappointing 8-9 season.  Holding an overall record of 72-56-1 and a 2-3 record in the playoffs with the team, Zimmer was hopeful the Vikings could sneak into the expanded playoffs this year. The Minnesota offense consists of Justin Jefferson, Dalvin Cook, Adam Thielen, and Kirk Cousins. Combine that with a strong defensive-minded coach and the Vikings can potentially make a run for the NFC North crown next season.

Vikings President Mark Wilf said in a press conference that it was time for the organization to move in a different direction.

Who are some of the possible candidates?

The Dolphins surprisingly decided to move on from Flores. Flores led the Dolphins to two straight winning seasons. Flores could work perfectly in Minnesota because of his strong defensive coaching scheme. Therefore, a rebuilt Minnesota defense could flow well with the already impressive Vikings offense.

Wilf said that the organization is not taking this transition as a rebuild and is hopeful for a successful 2022 campaign.

The former Philadelphia Eagles coach currently looks to get another head coaching opportunity. Pederson led the Eagles to the playoffs in three out of his five seasons, including winning a Super Bowl in 2018. However, Pederson was fired just two years later after disputes with the front office and struggles with Carson Wentz. Pederson left Philadelphia in an ugly way, but he is hopeful he can improve a promising team in 2022.

The current Rams offensive coordinator is the only coach listed here who has no head coaching experience in the NFL. O’Connell was the quarterbacks coach for the Washington Football Team in 2017 and 2018. Then, he transitioned to Los Angeles to coach under Sean McVay. Cousins and O’Connell worked together in 2017 in Washington, so the two could reunite in Minnesota and work well together. O’Connell coordinates for one of the leagues best offenses in the Rams, and if the Vikings take a chance on the young coordinator, their offense could possibly get better in 2022.