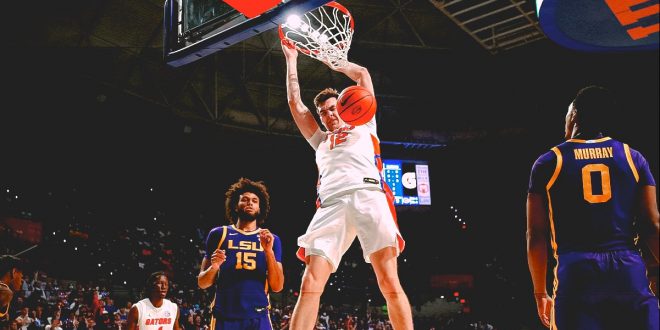 The Gators used an epic 10-0 run to complete a big-time comeback win over the Mississippi State Bulldogs. Florida was without their best player, Colin Castleton, but scored the upset victory despite his absence.

Things looked bleak at one point, but the big charge gave them a lead that they never relented. It was a much-needed win over a good Mississippi State team for Florida that Anthony Duruji said gives them confidence moving forward.

“Our swagger’s back,” Duruji said. “Sometimes we give other teams too much credit, but we’re good too.”

Basketball is known for being a game of runs, and one was all it took tonight for Florida. They pulled the game within one possession multiple times, but did not get over the hump until it was 67-66 with 4:58 remaining. That capped off a comeback that began with the Gators trailing 61-53 and ended in a 27-11 run over the final nine minutes.

Tyree Appleby said after the game the Gators knew it would be a challenge without Colin Castleton coming into the game. He mentioned that Mississippi State had three good bigs and their mindset was to be physical.

Early on it seemed like Castleton’s absence was going to be too much to overcome. Mississippi State dominated inside, winning the points-in-paint battle 18-6 in the first half. Florida entered the half trailing by six, which at the time felt like a win.

However, the script flipped in the second half and it is because of who stepped up in Castleton’s absence. The Gators actually equaled the Bulldogs scoring output in the paint in the second half which is a huge reason they pulled out the win.

Anthony Duruji led the way with 22 points, 18 of which came in the second half. Florida needed somebody to step up without Castleton and Duruji came through in a big way.

The other big man that came through in a big way was Jason Jitoboh. He struggled early, but scored all eight of his points in the final eight minutes to help the run in a big way. His back-to-back dunks cut the lead to one, and the next time down the floor the Gators took the lead on two Phlandrous Fleming Jr. free throws.

The dunks also brought energy to the crowd and got the O-Dome rocking. The place was half full, but it sounded like there were 100 thousand people inside at times. Jitoboh’s dunks were two of the loudest moments and the Gators fed off that energy according to their head coach.

“After we took that lead it got loud in there,” White said, “and I think that helped us defensively.”

Despite the rousing victory, there is still reason to be concerned for Florida.

After the game, White called Castleton’s shoulder injury “significant” and said he had no chance of playing on Wednesday.  White said he was “hopeful” that his star big man would not be out too long, but did not sound confident.

The Gators were able to rally without Castleton, but the flaws in the team were still exposed. Mississippi State dominated inside, outscoring the Gators 34-20 in the paint. They also out-rebounded Florida 31-23.

Florida escaped with a victory because they shot the ball well from the floor as well as from deep. They shot 51% from the field, but more importantly 42% from three.

The recipe of making outside shots in Castleton’s absence worked for Florida tonight, but banking on that as a recipe for success is not super promising. Florida came into the game shooting 43.1% from the field on the season and 30.6% from three.

Players like Duruji and Jitoboh will need to continue to step up on the inside in Castleton’s presence if the Gators are to succeed without him. Of course it would not hurt if guards like Appleby and Kowacie Reeves can continue to shoot it well. Reeves added 14 of his own on 4-7 shooting and 3-6 from three.

It will take a team effort, but this is reality for Florida now. It seems Castleton’s return is nowhere near imminent, if even possible. How the team’s identity changes without him will go a long way in determining their success this season.

The Gators’ next challenge without Castleton comes on Sunday as Vanderbilt comes to town at 1 p.m.