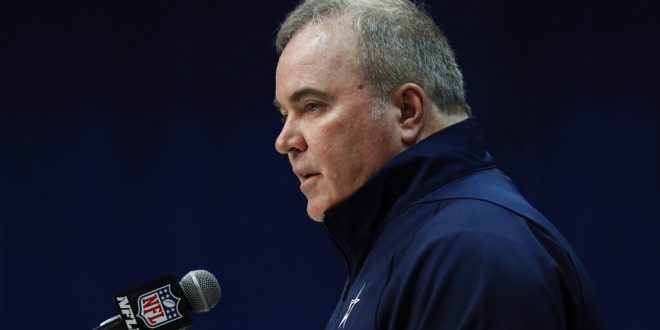 Dallas Cowboys’ head coach Mike McCarthy is not concerned about his future with the organization. After Sunday’s loss, McCarthy’s press conference on Wednesday indicated that he expects to be part of the team’s future plans.

McCarthy has compiled a 143-92-2 record in 15 seasons of coaching, earning a Super Bowl ring in 2010. In 15 years, the Pittsburgh native has guided his teams to just four losing seasons. He was  Motorola NFL Coach of the Year in 2007, after leading the Packers to a 13-3 record in his second season.

The decorated head coach has not found immediate success in Dallas. The famed franchise won its last Super Bowl in 1995, and has not reached the NFC Championship since 1996. The Cowboys have reached the playoffs just 10 times since winning their last Super Bowl 27 years ago.

After a tumultuous 2020 season marred with injuries and run-ins with COVID-19, the Cowboys bounced back as NFC East champions this year. Despite posting a 12-5 record in 2021, the Cowboys fell in the Wild Card round. Throughout two seasons in Dallas, McCarthy’s win percentage sits at 54%.  Although his career playoff win percentage also sits above .500, he hasn’t led the Cowboys to a playoff victory in two seasons.

McCarthy’s late-game decisions have been subject to criticism, particularly after the last game’s final play. With 14 seconds and no timeouts remaining, the Cowboys ran a quarterback draw in hopes to achieve better field position.  The play-call was ultimately Dallas’ final one of the season, as time ran out shortly after. The Cowboys offense appeared unprepared for the unorthodox call, they were unable to line up in time for another play.

Future In Dallas for McCarthy

McCarthy’s future in Dallas was confirmed after executive vice president Stephen Jones echoed McCarthy’s sentiments during an interview with Dallas-based radio station 105.3 The Fan. Jones, the son of Cowboy’s owner Jerry Jones, expressed that it is in the team’s best interest to keep McCarthy.

Offensive and defensive coordinators Kellen Moore and Dan Quinn plan to interview for head coaching jobs throughout the league, leaving Dallas scrambling for stability in it’s staff. Also, 21 players are set to become unrestricted free-agents this off-season. The franchise is facing a great deal of change and disarray in the near future, highlighting the need to hang on to a proven head coach.

Tyler Carmona is a junior journalism major at the University of Florida. Originally from Miami, Tyler played football as a wide receiver at the University of St. Francis before transferring to UF.
@@TylerCarmona
Previous Eagles Sticking With Hurts, Back Him As 2022 Starter
Next NCAA Rules on Transgender Athletes