By Tyler Acosta-Lightburn and Perry Yalkut

The Bronson Eagles extended their winning streak to six games against the Trenton Tigers on Thursday night, winning 70-68.

The Eagles started the game hot with a 7-0 run and ended up leading 40-32 going into the half. The Eagles had the lead primarily due to standout senior Anuery Montero’s play in the first half. Montero ended the half with 17 points. As a team, 24 of the Eagle’s first-half points came from three, but costly turnovers kept the game close going into the second half.

Bronson started off the game with a three by Dylan Homan last night versus Trenton pic.twitter.com/O71U2BaHFw

Trenton opened up the half with an 11-4 run taking their first lead of the game. The Eagles had a hard time breaking Trenton’s 1-2-2 full-court press, resulting in many turnovers throughout the second half.

Coach Billy McCall’s Eagles made an adjustment going into the fourth to break the press that had caused so many turnovers. McCall’s team also kept up its ferocity on defense throughout the game.

Montero shared what his coach McCall emphasized in the huddle going into the fourth.

“Coach told us to be patient and not to turn the ball over.”

Bronson limited the turnovers in the fourth quarter thanks to great vision and passing from guards Anuery Montero and Jeythian Merced.

Strong and one finish by senior Jesse Williams with 2:50 left in the game. pic.twitter.com/32XGSW1UlR

The atmosphere at Bronson was electric and made the game extremely intense. With adjustments and strong guard play, the Eagles overcame the 15 threes made by Trenton. Montero ended up icing the game with four clutch free throws and ended the game with a game-high 25 points.

Coach McCall had this to say about his team after the game.

“We’ve been teaching these boys ever since the beginning that they have to hold themselves accountable for the lack of discipline and push through, and I’m really proud of them for that.”

The Trenton Tigers’ 15 threes and stout defense were not enough to beat the Bronson Eagles. The Tigers now fall to 10-9 Overall and 1-3 in 1A District 7.

Up Next For the Eagles

The Bronson Eagles improve to 11-8 Overall and 4-3 in 1A District 7. On Friday, the Eagles look to continue their winning streak against Cedar Key and finish the season strong ahead of district playoff play. 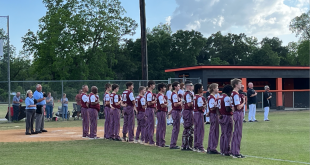 The Oak Hall Eagles have seen their fair share of action this season. However, in …