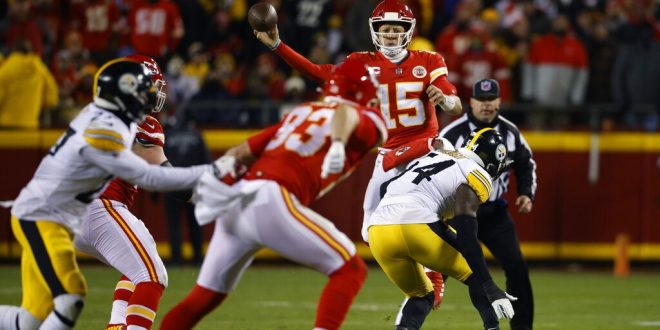 The Buffalo Bills (12-6) will square off with the Kansas City Chiefs (13-5) in an AFC Divisional game on Sunday. The two teams met in the AFC Championship last year when the Chiefs prevailed 38-24 to advance to the Super Bowl. They also matched up earlier this year, with the Bills winning, 38-20, in October.

Both teams advanced through the AFC Wild Card weekend with home victories. The Bills dispatched the Patriots, 47-17, in Orchard Park, and the Chiefs won 42-21 against the Steelers. Needless to say, expect fireworks in this clash of offensive juggernauts.

Buffalo’s Defense Put to the Test

One of the biggest matchups to look for will be how the Chiefs’ offense fares against the Bills’ No. 1 defense in the NFL. Buffalo has been shutting down teams defensively during their five-game winning streak, but they haven’t faced competition the likes of Patrick Mahomes.

Since losing their star cornerback Tre’Davious White for the season to a torn ACL, the Bills have faced Mac Jones, Cam Newton, P.J. Walker, Matt Ryan and Zach Wilson. The only established quarterback the Bills have faced since White’s injury has been Tom Brady, and he threw for 350+ yards and two touchdowns.

When the Bills beat the Chiefs by double digits in October, they were playing a very different Kansas City team. The Chiefs had started the season 2-3 and were struggling heavily on offense. Since then, they’ve only lost two games and Mahomes has looked like his usual self.

Buffalo’s secondary has certainly exceeded expectations since White’s injury, but they’ll be tested on Sunday. But what the Chiefs can do on the ground might make for an even more interesting matchup.

Clyde Edwards-Helaire sat out the Chiefs’ Wild Card game against Pittsburgh with a shoulder injury. Jerrick McKinnon played in his place and tallied 142 total scrimmage yards and a touchdown. Edwards Helaire’s status for Sunday remains uncertain, but if he doesn’t suit up, McKinnon should be in line for another start.

Chiefs Offensive Coordinator Eric Bieniemy said CEH will do what he can to play on Sunday but couldn’t make any promises.

What Josh Allen Can Do

Bills gunslinger Josh Allen put on a show in Buffalo in the Wild Card game, throwing for 308 yards and five touchdowns, while adding 66 yards on the ground, as well. He silenced all of the doubts of his abilities in the Buffalo cold while walking all over an AFC East rival.

After losing two straight to the Patriots and Buccaneers, the Bills have turned things around. Josh Allen is a huge part of that. Offense should abound, and the experts are expecting a close game, with Kansas City only favored by 1.5 on their home field.

The two teams will face off in Arrowhead Stadium at 6:30 on Sunday. The game will air on CBS.

I'm a third-year student at the University of Florida passionate about storytelling and sportswriting. My goal is to work in communications for a professional sports team after I graduate.
Previous Tampa Bay Rays Dual-City Plan with Montreal Shutdown by MLB
Next Florida Gators Women’s Basketball Prepares for No. 11 LSU