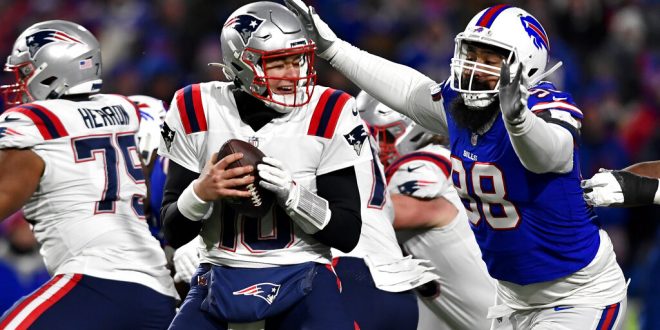 The New England Patriots crashed out of the Playoffs in dramatic fashion on Saturday night. The Pats suffered their worst playoff loss of the Belichick era at the hands of the division-rival Bills, 47-17.

A tough end to the season. pic.twitter.com/MlBmgr0kbk

The result made a statement about who rules the AFC East post-Brady, and how far the Pats have fallen without him.

The days of dynasty are waning in Foxboro and this loss may have put the nail in the coffin. While the Pats showed flashes of greatness in the middle of the season, the end result is closer to who they truly are than the team that won seven straight at one point in 2021.

They finished the regular season 10-7, but only three of those wins came against teams that finished with a winning record. They also started the season 2-5 before winning seven straight, then finished by losing three of their last four. It was a roller coaster season in New England behind rookie quarterback Mac Jones, and now they face an offseason that poses a lot of questions.

This is how they got here, and where they might go after this disastrous end to the season.

The Bills routed the Patriots and became the first team in NFL history to pitch a perfect game on offense. The Bills scored a touchdown on every single possession except to kneel down at the end of the game.

The Buffalo Bills just had the NFL’s first ever perfect offensive game.

No punts. No picks. No fumbles lost. No field goals. All touchdowns on every single drive until the kneel downs.

And they did it against a top five defense.

It was a shocking performance by a New England defense that had been stellar all year long. The Pats ranked second in points allowed per game (17.8) and third in yards allowed per game (310.8), but they met their match last Saturday. The Bills put up 482 yards of offense and seven touchdowns, including five through the air.

Josh Allen had an all-time Playoff performance, going 21-25 for 308 yards and those five touchdowns. Even more impressive, he did it against the second-ranked passing defense in the league. The Pats defense allowed just 187.1 yards per game during the regular season.

The drubbing was one of the stories of the weekend in the NFL. Anytime Belichick’s Patriots get drubbed in the fashion, it makes headlines. For it to happen in the playoffs, it only shines a brighter light on their issues.

The loss showed that the Patriots were more flawed than their record led people to believe. The offense was limited, averaging just five yards per play, and Mac Jones seemed to not be quite ready for that level. The Bills swarmed Jones and held him to 24/38 for 232 yards (6.1 y/a) two touchdowns and two interceptions.

The Bills seemed to be out for revenge on Saturday and it showed in one key area. In the teams’ first matchup of the season, the Patriots won in Buffalo by simply running through the Bills. The Pats ran the ball 46 times for 222 yards and a touchdown, while Jones attempted just three passes. The Bills seemed to take offense to taking a physical beatdown, and it showed on Saturday. This time, Buffalo held New England to just 89 yards on 20 carries.

Buffalo dominated up front, sacking Jones three times and rushing for 174 yards on 29 carries. It was a complete reversal of script from the first game, and exposed a flawed New England team.

Questions linger over the franchise heading into the 2022 offseason and answers need to be found quickly. The Pats already had to watch Tom Brady win a Super Bowl in his first year away from the team, and now they have to watch him go for another from the couch.

There is no doubt that everybody in Foxboro feels the pressure from Brady having so much success in Tampa. If Brady does it again, it will only strengthen the narrative that the Patriots dynasty was more about Brady than the franchise.

The biggest factor of course moving forward is Brady’s replacement, Mac Jones. Jones was highly regarded in his rookie year, but in the grand scheme of things he was fairly mediocre. Jones ranked eighth in completion percentage (67.6%), 14th in yards per attempt (7.3) and 15th in QB rating (92.5). His 22 touchdowns were just 14th in the league and his 13 interceptions were the 10th highest total in the league.

The truth is Jones was a middle of the line quarterback in 2021. He benefitted from having a great defense behind him that gave him opportunities to score, as any young quarterback would. While that is a fine rookie year, the Pats will need huge growth from Jones going forward to return to contender status. It is very hard to win in today’s NFL without a good-to-elite quarterback, especially when you are filling in for Tom Brady.

Mac Jones is about as close to Tom Brady as I am to Buffalo. I'm in Los Angeles.

The bright spot for New England is the defense is set to stay together. Matt Judon emerged as a superstar this year and he is locked up moving forward.

However, they have one more player they need to lock up. That is a free agent this offseason and now star cornerback J.C. Jackson. Jackson is a key cog on the Pats defense and they will need him back to sure up that extremely tough secondary.

Even if the Pats move on, you can always count on them to replace headline talent with talent they develop. People may be doubting Belichick’s impact against Brady’s, but they will never doubt his ability to put together a stout defense.

Either way this is unfamiliar territory for the Patriots. The franchise and their fans have become accustomed to winning Super Bowls and anything short of that being a disappointment. But this is life without Brady now and Pats fans may be facing a new reality. However, one offseason can restore those winning ways and assert that was Brady and the franchise created the dynasty.

Ethan Budowsky is a fifth-year telecommunications student at the University of Florida. He covers Major League Baseball for Just Baseball Media and previously covered the Miami Marlins for their SB Nation affiliate, Fish Stripes.
@ethanbudowsky
Previous Cowboys Season Ends in Loss Against the 49ers
Next Cardinals Lose in Playoff’s After Promising Start to Season