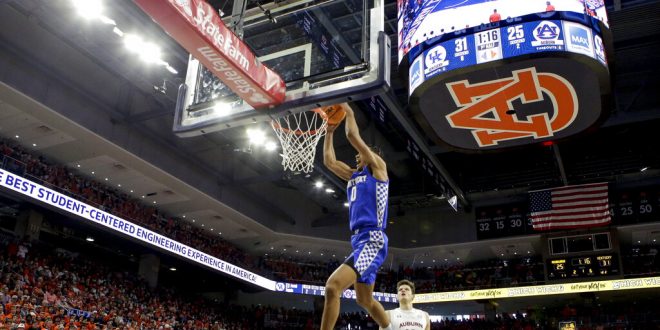 Kentucky forward Jacob Toppin (0) dunks the ball against Auburn during the first half of an NCAA college basketball game Saturday, Jan. 22, 2022, in Auburn, Ala. (AP Photo/Butch Dill)

Kentucky is looking to bounce back from their 80 – 71 loss to No. 2 Auburn on Saturday. They were in a good position until the Cats lost two of their players due to injury. Kentucky point guard TyTy Washington was out after 8 minutes left of the first half. Washington suffered an ankle injury and did not play for the rest of the game. Sahvir Wheeler was out due to a hard collision with Auburn’s 7- foot -1 center Walker Keesler.

“He [Wheeler] spearheads our defense with that kind of pressure, so we’ve got to do a better job of protecting him. In an environment like Auburn with how loud it was and at the speed of the game that’s happening, he probably didn’t hear it” University of Kentucky’s assistant coach Orlando Antigua said Monday. “Oscar said he called it, probably didn’t hear it, but we’ve got to make sure we protect Sahvir if we want him to continue to be the catalyst to our defense the way he has been.”

The Bulldogs announced that forward Tolu Smith is week to week due to suffering a knee injury in Saturday’s game against Ole Miss. At the beginning of the season Smith was recovering from a stress fracture in his foot and missed games. The team is not new to playing without Smith.