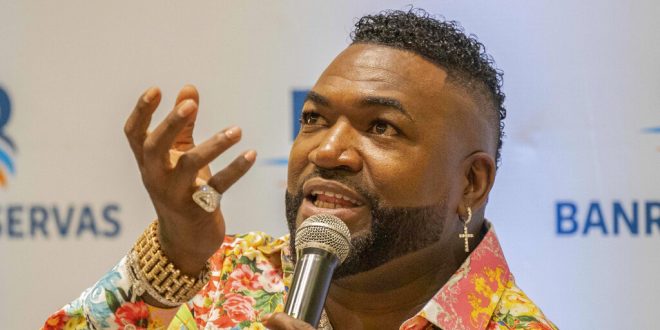 The National Baseball Hall of Fame added only one member in its 2022 class on Tuesday evening as David Ortiz earned induction through the Baseball Writers Association of America’s voting tally.

Ortiz was the only member of the class to exceed the 75-percent threshold required for entrance on the BBWAA ballot.

Barry Bonds, Roger Clemens, Curt Schilling and Sammy Sosa — all in their 10th and final year on the writers’ ballot — failed to hit the 75-percent mark.

Ortiz received 307 of 405 writers’ votes to become the second Hall of Famer from the curse-breaking Red Sox, that 2004 team that won the franchise’s first title in more than eight decades — a drought that had possibly been a cosmic curse for the infamous trade of Babe Ruth to the Yankees.

Josh Rawitch, President of the National Baseball Hall of Fame, says that Ortiz is the fourth Dominican born member to enter the Hall of Fame.

Ortiz is also the fourth players used primarily as a designated hitter to be voted into the Hall of Fame, joining Edgar Martinez, Frank Thomas, and Harold Baines.  He was the only one out of a roster of 30 to make it into the elite group of athletes. His 307 ballots put him over the required 75% threshold in his first year of consideration.

Jack O’Connell, member of the Baseball Writers Association of America, called Ortiz to let him know Cooperstown was calling.

Ortiz played six seasons for the Minnesota Twins before joining the Red Sox in 2003 at age 27.  He also spent time with the Seattle Mariners organization, but he didn’t ascend into his now recognizable “Big Papi” form until he joined the Red Sox in his late 20s.

Three notable superstars that fell short are Barry Bonds, Roger Clemens and Alex Rodriquez; Bonds and Clemens were both shut out in their 10th and final year on the ballot.

Jeff Passan, MLB reporter for ESPN, has a lot to say about this matter.

Both are closely associated with the performance enhancing drugs scandals that afflicted the sport during the early 2000s.  Bonds appeared on 66% of the ballots and Clemens on 65.2%.

If the vote were on statistics only, Bonds, Clemens and Rodriguez would have been shoo-ins.  Bonds, who played left field for the Pittsburgh Pirates and San Francisco Giants during his 22-year career, is Major League Baseball’s all-time leader with 762 career home runs. He hit a record 73 in one season.  He was named National League MVP a record seven times and won eight Gold Glove awards for his defense.

He ranks third on MLB’s all-time strikeouts list and is ninth on the all-time wins list. He was on two Yankees World Series winning teams.

Rodriguez finished fourth all-time in home runs and RBIs, won three MVP awards and was on one World Series winner.

There is still a chance for Bonds, Clemens and others. This year, the Today’s Game Era (1988 to now) Committee will vote in December for the class of 2023.

Ortiz will be inducted on July 24 in a ceremony at the Hall of Fame in Cooperstown, N.Y.

Nobody was more clutch than Big Papi.

The 1st of 12 walk-off homers for @DavidOrtiz with the @RedSox ⬇️ pic.twitter.com/gQnW3aWF8g