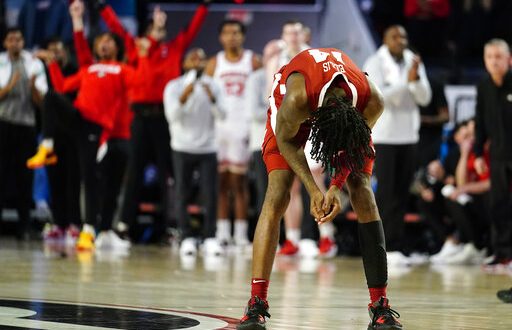 Alabama guard Keon Ellis (14) reacts after an Alabama foul late in the second half of an NCAA college basketball game against Georgia, Tuesday, Jan. 25, 2022, in Athens, Ga. (AP Photo/John Bazemore)

Yes, the Georgia Bulldogs beat the Alabama Crimson Tide. However, this time it was on the hardwood and not on the field.

Georgia knew it had a tough opponent coming into its house. It knew if it were to win, it would take an all-around team effort to beat Bama.

Neither team could really hold its leads in the first half. At one point, Georgia led by eight, but saw it disappear within the next two minutes. On the other side, Alabama’s largest lead was six, which came from a run to end the first half. Alabama would lead 42-36 at half.

This second half was no different, neither team could stretch a lead large enough to really put the other down. Georgia found it hard to move past Alabama in the scoring department in the second half. Every time it tied it up, Alabama would hit a shot to put it back in the driver’s seat. This continued all the way until the four-minute mark of the second. With about four minutes left, sophomore guard Jabri Abdur-Rahim was fouled and hit two free throws to give the Bulldogs the 67-66 advantage over the Crimson Tide. From there, it was back-and-forth fighting for the lead until Georgia saw itself run away with it late due to free throws. Georgia made 11 free throws and just one layup in the final three minutes and five seconds of this game.

This small, but very important, area of free throws is where Georgia took advantage. The Bulldogs made 24 of their 30 free throw attempts, while the Crimson Tide made just 13 of their 20 attempts. This 11 points made the difference for Georgia as they made two less shots than Alabama.

As a team, Georgia shot 44.6% from the field and 34.8% from behind the arc. Additionally, it had four player in double digits in the scoring department. It was led in scoring by senior guard Aaron Cook who had 15 points, four assists, and one rebound on the night.

It was also able to move the rock efficiently. The Bulldogs ended the night with 16 total assists. Of the nine players who logged minutes Tuesday night, seven of them had at least one assist.

For the Bulldogs’ defense, they held the Crimson Tide to 43.5% from the field and just 26.5% from three. For Alabama, its leading scorer was none other than starting guard Jaden Shackelford. He led the Crimson Tide with 20 points, including six threes on the night.

Coming into this game, Alabama found itself as the 14.5 point favorites despite being the away team on Tuesday. This might have been due to the Bulldogs being on an eight-game losing streak this season. Furthermore, the Bulldogs were on a nine-game losing streak in the SEC extending from last season to 2021. They lost the last three games to end the season and the first six to begin this SEC campaign.

It's Georgia's largest upset win since beating Kentucky as a 17.5-point underdog on March 4, 2009.

Alabama joins Kent State as the only teams with multiple upset losses as 14+ point favorites this season (also at Missouri). pic.twitter.com/X0r6X12Y5o

Despite beating Gonzaga early on this season, Alabama’s loss Tuesday is something that is truly painful to its resume moving forward. This Georgia team had zero, yes I said zero, SEC wins on the season. Many college basketball fans were hounding Bama for losing to Georgia, and it’s no surprise given the talent on the team. Players like Jaden Shackelford, J.D. Davison and even Jahvon Quinerly coming off the bench.

Georgia woke up today with a 5-14 record.

Alabama lost to Georgia again. This time in basketball. Horrible loss for the Tide.

So What’s Next for These Teams?

The Georgia Bulldogs will the end the month of January with traveling to Tennessee and the Vanderbilt Commodores. After that, they will begin February with Arkansas, and then they will take on the No. 1 ranked team in the country, the Auburn Tigers.

The Alabama Crimson Tide will host to the No. 4 Baylor Bears in the annual SEC/Big 12 Challenge. Unfortunately, they will then have to travel to Auburn for their next game, and then host Kentucky after. A rough three game stretch for the Crimson Tide.