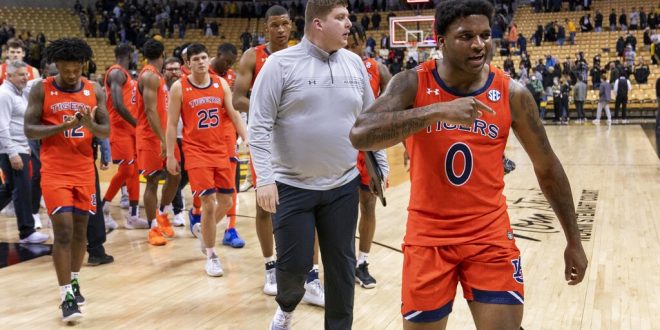 The latest AP poll ranked Auburn as the top basketball team in the country for the first time in the program’s history. Auburn’s first game at number one was almost one to forget, however, as Auburn was nearly upset on the road to Missouri.

This entire season, Auburn has been cruising through their schedule. The Tigers were 18-1 heading into Tuesday night’s game, with the only blemish being an early loss to UConn. Auburn also has a perfect conference record. Included in that run were wins over LSU, Alabama and Kentucky.

Missouri has not shared Auburn’s success. Early losses to Kansas City and Wichita State set the tone to what has been an underwhelming year. Mizzou went into Tuesday’s game with an 8-10 record. The Tigers did pick up a win over Alabama three weeks ago, but have not accomplished much since.

The game started with Missouri holding the upper-hand. Opening the game with a 12-2 run, Mizzou led by 10 after the first seven minutes of play. Five of those points were scored by Javon Pickett. Auburn finally got their scoring going with the help of three-pointers by Jaylin Williams and Wendell Green Jr. Scoring remained even for the next several minutes, with Missouri holding a 26-17 lead. However, Auburn went on a 11-1 run led by K.D. Johnson and pulled ahead for the first time of the game.

The game went into halftime tied 31-31. Scoring remained back-and-forth, but Missouri had a slight advantage and pulled ahead 40-38. A scoring drought ensued, and neither team scored for almost four minutes. This drought was ended with a layup Devan Cambridge to tie the game at 40 each.

The rest of the half was tightly contested. Twice Auburn pulled ahead by three, only for Missouri to quickly answer and regain the lead. Missouri led 51-50 with under two minutes to play. However, Johnson scored two layups and a free throw, and suddenly Auburn led by four with under a minute remaining.

Despite holding a slim lead the majority of the game, Missouri now had its backs against the wall. Pickett sunk a three-pointer to draw Missouri within one. This was the last Missouri had the ball, though, as Auburn was able to run out the rest of the clock and win 55-54.

Auburn’s first game as a top-ranked team almost ended in disaster. At the end of the day, it still counts as a win and Auburn remains perfect in SEC play and improves to 19-1 on the season. For Missouri, its falls to 8-11 and a 2-5 SEC record.

Key players from the game were Auburn’s top scorer K.D. Johnson with 17 points on six field goals. Walker Kessler had a double-double for Auburn, scoring 13 points and hauling in 12 rebounds. For Missouri, its standout was Javon Pickett, who scored 17 points while shooting six for 10 including two for three on three-pointers.

The next games for both teams will be in the SEC/Big 12 Challenge on Saturday. Auburn plays host to Oklahoma while Missouri is on the road against Iowa State.

Jack Shivertaker is a senior at the University of Florida pursuing a degree in Journalism with a focus on sports media.
@JackShivertaker
Previous Georgia Upset Alabama at Home
Next Sean Payton talks decision to step down